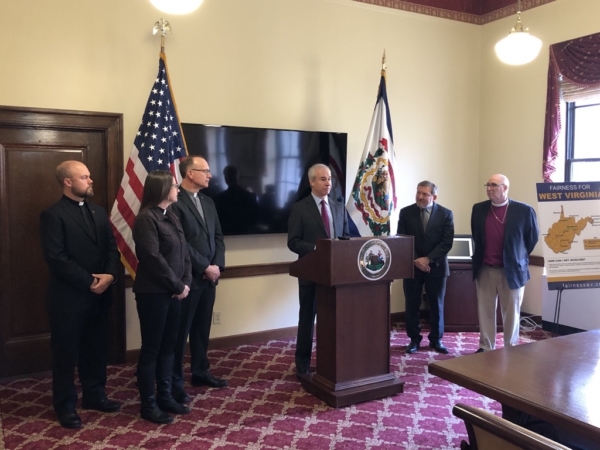 The Episcopal clergy members are a part of a group of more than 100 diverse faith leaders from across West Virginia to endorse the Fairness Act, a proposed bill that would ensure LGBTQ people are protected from discrimination in employment, housing and public spaces.

A full video of the press conference is available online here.

“Faith leaders have partnered with us to advance equality in the past, but this is unprecedented,” said Andrew Schneider, executive director of Fairness West Virginia. “We’ve never seen such a large and engaged coalition of faith leaders coming together to endorse nondiscrimination protections for LGBTQ people. It’s clear the tide has turned on public opinion, and I’m hopeful our lawmakers take this as a sign that West Virginia is ready for the Fairness Act.”

The coalition was announced less than a month after the legislative rulemaking committee voted in favor of changing the state’s foster care regulations. The proposed change would allow discrimination against LGBTQ youth and foster care families by making the protected classes in the rule match the state’s Human Rights Act. If the Fairness Act is adopted, however, the harm of this proposed change would be eliminated and there would be more available loving families to foster our state’s most vulnerable children.

The list is still growing. Faith leaders can sign up to join the coalition by visit www.fairnesswv.org/faith.

“Each person is created by God, for the Kingdom of God, and nothing we can say or do will remove us from the Love of God. This is why the Fairness Act is needed,” said the Rt. Rev. W. Michie Klusmeyer, Bishop of the Episcopal Diocese of West Virginia. “While the discussion of human sexuality continues to consume many people’s conversations, nowhere in the Gospel of Jesus Christ are we allowed to remove the ‘God-givenness of any individual or group of people.”

Clergy members from the Episcopal Church have one of the highest representations in the coalition.

“I’m grateful to the outpouring of support our friends in the Episcopal Church have shown us,” Schneider said. “Bishop Klusmeyer and his staff were crucial in our efforts to build such a large coalition. We look forward to future partnerships as we make West Virginia a better place for LGBTQ people to live.

Other faith leaders who signed onto the coalition attended the press conference and spoke in favor of the Fairness Act.

“As I read the Bible, all people are created in God’s image and we all bear God’s gracious and loving reflection,” said. Rev. Jim Wicker, of Cross of Grace Lutheran Church in Hurricane. “LGBTQ people are beloved and valuable children of God, and the Fairness Act will ensure that none of them are discriminated against because of who they are or who they love.”

“As a member of the Jewish faith, I am proud to stand with my fellow rabbis of our state and spiritual leaders of every faith tradition in West Virginia affirming the fundamental principle that all human beings are created in the Divine Image,” said Rabbi Victor Urecki, of the B’nai Jacob Synagogue. “The universal message we all share, ‘loving one’s neighbor as yourself’ calls,’ on us to support updating West Virginia’s laws to extend urgently-needed protection to our LGBTQ brothers and sisters.”

“In order to remain in West Virginia, our LGBTQ young people need to know that they can build a life here as adults,” said Jenny Williams, a pastor with the United Methodist Church. “The Fairness Act ensures their basic rights of housing and employment – a foundation that is crucial for their future contributions to the flourishing of our state.”

West Virginia’s Republican Senate President Mitch Carmichael recently joined LGBTQ advocates as they called on lawmakers to adopt the Fairness Act. Versions of the Fairness Act have been introduced for many years in the state legislature. Momentum has grown in recent years, including lead sponsorship from Senate Majority Leader Tom Takubo and a bipartisan coalition of 44 cosponsors across both chambers. If West Virginia passes the Fairness Act in 2020, it will become the 21st state to pass comprehensive nondiscrimination protections for LGBTQ people.