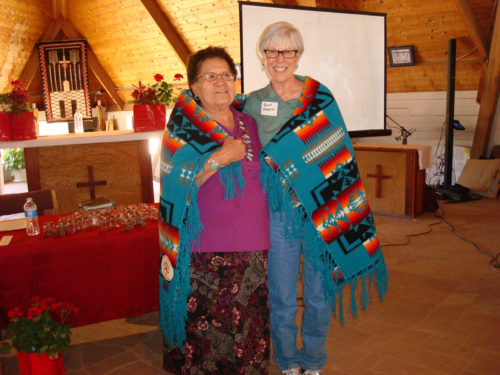 Alice Mason, tribal elder and lay pastor of St. Michael’s Church in Upper Fruitland, New Mexico, and Bonnie Anderson, president of the House of Deputies, display a Pendleton blanket presented to Anderson by the Episcopal Church in Navajoland “for her continuous and unfailing support to Navajoland and for her special heart for the dignity of every human being.”

[Episcopal News Service] President of the House of Deputies Bonnie Anderson was a special guest as the Episcopal Church in Navajoland celebrated its 36th annual convocation at St. Christopher’s Mission in Bluff, Utah.

Bishop David E. Bailey and representatives from each congregation gathered from across the 26,000-square mile area mission. Bailey enthusiastically addressed the Convocation with a message of hope and accomplishment in the midst of formidable economic and social issues.

The area’s new mission focus states that it has a ministry to “address the spiritual, social, and economic needs of Navajo and other Native peoples through worship, education, training, and social engagement.

This ministry and the crucial role of all baptized people were at the heart of Anderson’s message when she addressed the convocation, which passed a special resolution thanking her “for being such an example of faithfulness and generosity in respecting the dignity of every human being.”

Many Navajo families struggle with the social concerns that accompany the near 50% unemployment and the isolation of the region. Harold Eagle Bull from South Dakota conducted a workshop looking at ways of curbing the suicide rate.

Steve Kelsey and ‘Red’ Stevens introduced some new concepts in Mutual Ministry. The positive impact of ongoing programs such as the Hooghan Learning Circle, Asset Based Community Development, White Bison, and anti-racism training were further cause for celebration.

The highlight of the convocation was the ordination of Catherine Plummer as a transitional deacon. She is one of 11 emerging leaders in the discernment and ordination process — the dream of Plummer’s late husband, Bishop Steven Plummer, becoming reality.

Dean Mark Goodman from St. John’s in Albuquerque delivered a heartfelt charge to the ordinand, expressing his personal gratitude for the connections and partnerships between Navajoland and the wider church.

The ordination ceremony combined the rich spirituality of traditional Navajo customs with the Episcopal liturgy. A medicine man dedicated the site before delegates arrived, and Cornelia Eaton set the tone for the ordination with a special ceremony that involved smudging with cedar. Looking toward the four sacred mountains, sanctifying the sanctuary with prayers from all four directions, she blessed those gathered as her two eagle feathers directed the sacred smoke “first toward the ground, where we touch Mother Earth’s sustaining presence, then toward the sky, where the Father’s eternal Spirit encompasses all wisdom.”

The convocation endorsed formal relationships with the Diocese of Arizona and the Episcopal Office of Armed Services, and Bailey noted that the current companion diocese relationship with Rio Grande has proved invaluable. He encouraged everyone to persevere in spite of the economic hardship, noting how rich the people of the area are in spirit.

To signify the intent of Navajoland to reach out to others in need, baby food jars were passed out by the Bishop for each congregation to take “baby steps” and fill them with offerings that will be carried to General Convention for Haiti.