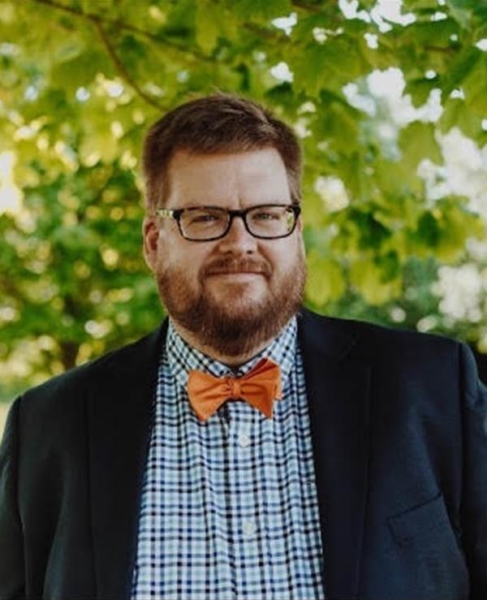 Nashotah House Theological Seminary is pleased to announce the appointment of Dr. Geoffrey Williams as their new Assistant Professor of Church Music and Director of Chapel Music. Williams holds a Doctorate in Musical Arts from the University of Illinois and received his B.A. from Westminster Choir College. Acclaimed for his “deeply hued countertenor” (New York Times), Williams is in demand as a singer, conductor, teacher, and early music specialist throughout the United States and abroad.

Dr. Williams is best known as the founder and artistic director of the extraordinary vocal ensemble, New York Polyphony which is introducing a new album, Peñalosa – Lamentationes, on September 6, 2019. The album features Dr. Williams singing the countertenor part in the ensemble which is an ancient and treasured practice of sacred choral music.

Williams hails from the Midwest and began his musical life as a treble in the American Boychoir. A devoted church musician, he has served the parishes of Emmanuel Memorial Episcopal Church (Champaign, IL), St. Mary the Virgin, Times Square, Trinity Church (Princeton), Washington National Cathedral, and was for a decade a Gentleman of the Choir of Men and Boys at Saint Thomas Church, Fifth Avenue (NYC). Williams is the son of a Nashotah House alumnus; indeed, he was born and baptized at Nashotah House! He joined Nashotah House’s faculty in July 2019, further evidence of God’s rich blessing upon the seminary in the acquiring faculty members of the highest caliber. Dr. Williams is married to Emilie (also a musician) and they have one son, Ellis Michael.

New York Polyphony’s album Times Go By Turns was nominated in 2013, and Sing Thee Nowell was nominated in 2014 for GRAMMY Awards, both in the category of “Best Chamber Music/Small Ensemble Performance.” When you hear them, you will immediately know why. With such exquisite ensemble singing of traditional and modern arrangements—so full, rich, and complex—it’s hard to believe you’re listening to only four men.

An ALBUM RELEASE PARTY for New York Polyphony’s latest album, Peñalosa – Lamentationes, will be held at Nashotah House Theological Seminary, 2777 Mission Road, Nashotah, WI, 53058, on Sunday, September 15, 2019 from 7:00 p.m. to 8:30 p.m. in Adams Hall. The event is free and open to the public. A variety of NYP’s CD’s will be available for purchase, with proceeds going to the Nashotah House Choral Scholars. Visit www.nashotah.edu for more details and to RSVP.

About Nashotah House Founded in 1842 as an heir of the Oxford Movement and inspired by Jackson Kemper, the First Missionary Bishop of the Episcopal Church, Nashotah House exists to form persons for ministry in the breadth of the Catholic Tradition for the Episcopal Church, Churches in the Anglican Tradition, the wider Anglican Communion, and our Ecumenical Partners, thus continuing to serve our historic role as “The Mission,” empowering the Church for the spread of the Gospel of Jesus Christ.

About New York Polyphony Praised for a “rich, natural sound that’s larger and more complex than the sum of its parts” (NPR), New York Polyphony is one of the foremost vocal chamber ensembles active today. The four men, “singers of superb musicianship and vocal allure” (The New Yorker), give vibrant, modern voice to repertoire ranging from Gregorian chant to cutting-edge compositions. Their dedication to innovative programming, as well as a focus on rare and rediscovered Renaissance and medieval works, has not only earned New York Polyphony two GRAMMY nominations and wide acclaim, but also helped to move early music into the classical mainstream.