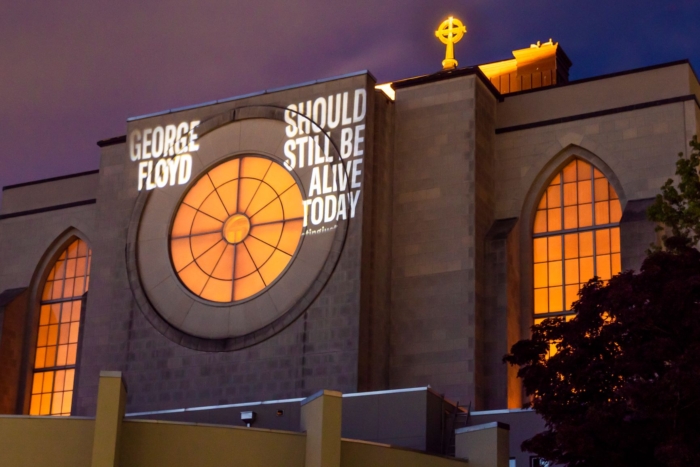 The west façade of Saint Mark’s Cathedral, onto which the with the words “George Floyd should still be alive today” are projected. Photo credit: Brian Smale.

From May 25 through June 8, 2021, the names of more than 30 people killed by police will be projected onto the west façade of Saint Mark’s Episcopal Cathedral on Capitol Hill in Seattle, visible from Interstate 5, Lake Union, and beyond. Beginning with George Floyd on May 25, the anniversary of his killing, different names will be projected each night, each followed by the words “…SHOULD STILL BE ALIVE TODAY.” This collaboration with the ACLU of Washington (ACLU-WA) and the Washington Coalition for Police Accountability (WCPA) expresses a shared belief that, even as important work around police reform continues through legislative action and policy changes, true justice would be that these people were never killed in the first place.

While the project began with George Floyd’s name on May 25, all other names will be those of people killed in Washington, including King, Pierce, Clark, and Snohomish Counties. The goal is to preserve the memory of local cases that may be in danger of being forgotten, and to serve as a reminder that these tragedies occur in Washington too, not just in other states. In Washington, about 40 to 50 people are killed by police officers each year. These victims are disproportionately Black, Brown, Indigenous, and Asian American Pacific Islander Washingtonians. The individuals whose names will be projected onto the cathedral have been included with the consent and support of their families through the WCPA, an organization which centers the voices of impacted family members whose loved ones have been killed by police.

“It’s heartwarming to see different communities come together to help support our cause and our fight for Jesse,” said Kelli Saeteurn, cousin of Jesse Sarey, one of the many people whose names will be featured during the project.

The projections will also direct people to projectingjustice.org, where anyone can learn about the lives of those named as well as the circumstances of their killings. In addition, the site explains the ACLU of Washington’s work to build a new system in which such unjust killings do not happen with alarming regularity. To that end, the ACLU-WA and WCPA  pressured the state legislature through lobbying, organizing, and policy efforts. As a result of that work, Washington state passed 14 bills in the 2021 legislative session that are aimed at reducing police violence.

“We are extremely proud of what we accomplished in Olympia this year and hope all the legislation passed creates an environment where no other family has to see a loved one’s name added to a list of people killed by police,” said Enoka Herat, police practices and immigrant rights counsel for the ACLU-WA. “This project is a reminder that true justice would be for each of these individuals to be alive today.”

Saint Mark’s Episcopal Cathedral has been committed to social justice since its founding in 1889. Believing that racism and white supremacy are sins which violate the sacred dignity of every human being, the cathedral is currently providing sanctuary to Jaime Rubio Sulficio, an immigrant facing an unjust deportation, and in the last year the community has recommitted itself to antiracist work, not only through classes, film screenings, and book studies, but also through a process of self-examination and difficult conversations within the community. The Saint Mark’s Vestry unanimously endorsed this projection project.

“Many who have never set foot inside the cathedral are familiar with Saint Mark’s as the big church on the hill that they drive past every day,” said The Very Rev. Steven L. Thomason, Dean of Saint Mark’s. “It is good and right to be able to leverage our most prominent public asset, the building itself, to ‘say their names’ in such an extraordinarily visible way.”

Names will be projected beginning at sunset and continuing for at least two hours each night. For a complete list of victim names and projection dates, visit projectingjustice.org or saintmarks.org/projectingjustice

Names to be projected: