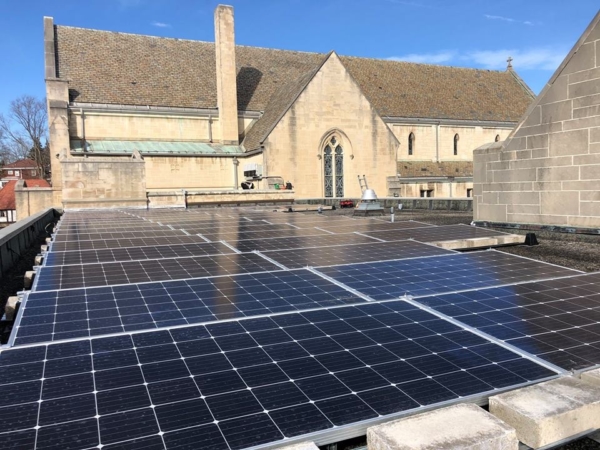 St. Paul’s Episcopal Church in Mt. Lebanon will celebrate its “moving off the grid” when it formally inaugurates its newly installed solar panels during a blessing ceremony to take place on Saturday, June 8 at 3:30 p.m.

Bishop Dorsey McConnell of the Episcopal Diocese of Pittsburgh will officiate the service from the roof of the church.

St. Paul’s is the first church in southwestern Pennsylvania to install its own solar panels on-site, while others have switched to solar power through cooperatives or third-party electric providers, according to Pennsylvania Interfaith Power and Light, a State College-based organization that helps communities of faith respond to climate change.

“On a nice day, our building is totally powered by the sun,” said St. Paul’s rector, the Reverend Noah H. Evans.

The building, located at 1066 Washington Road, is a three-story structure that includes a 400+ seat sanctuary, a nursery school serving 200 children, church offices, and meeting rooms. It is in use seven days a week, usually for more than 12 hours a day.

The first full month of solar usage saw the amount of purchased electricity reduced nearly 70% compared to the previous April.

“Going solar is a very significant and public declaration of this church moving towards a more sustainable building, and being good stewards of the planet and of our financial resources,” said Stephen Sumpter, a St. Paul’s parishioner who chairs its Sustainability Committee.

“This move is very much a response to what we promise in our baptism vows as Christians, to cherish the wondrous works of God, and protect the beauty and integrity of all creation,” added the Reverend Evans.

A total of 51 Heliene, Inc. solar panels have been installed on the roof of the church’s education wing, which parallels Washington Road. The roof is a flat surface, which affords daylong exposure to the sun’s path east to west. And because the roofline is obscured by a stone ledge, the panels cannot be seen from the ground.

The array of panels can generate more than 18 kilowatts, and are the first draw on power for the property. When the panels produce more energy than is needed at the church, power is supplied back to the grid with a reimbursement from Duquesne Light. To date, the church has received more than $400 in payments.

This past Sunday, for example, with mostly cloudy skies and temperatures in the mid-60s, St. Paul’s needed to run its air-conditioning for the 300 people filling the church, and still received a rebate from the utility company.

The total cost for planning and installation of the solar panels came to $48,000. It was funded by a capital campaign supported by St. Paul’s parishioners.

The introduction of solar power is the latest in a series of steps taken by St. Paul’s Episcopal Church to reduce its energy consumption. In recent years, the church switched from incandescent to LED lighting, installed motion detectors to turn off unnecessary lights, and replaced decades-old windows with energy-efficient ones.

St. Paul’s has a “good problem,” in that recent growth in its membership has created an increased use of the building, and with it, a greater demand on utilities. Yet early indications are that the energy conservation efforts are paying off, even as usage increases.

Outside consultation on the solar panel project was provided by Greg Winks of Solbridge Energy Advisors, LLC. The panels were installed by Energy Independent Solutions. Both companies are based in Pittsburgh.

Leaders of Pennsylvania Interfaith Power and Light see St. Paul’s as a model for other churches.

“All religious traditions call us to care for the most vulnerable, and to care for our common home,” said Cricket Eccleston Hunter, Program Director for PA IPL. “We hope that congregations who cannot take on installing solar will still divest and reinvest at the outlet, choosing to purchase electricity generated by wind and solar — and that they will also consider making that commitment visible in some form to all who pass by.”

About the Episcopal Diocese of Pittsburgh: www.episcopalpgh.org