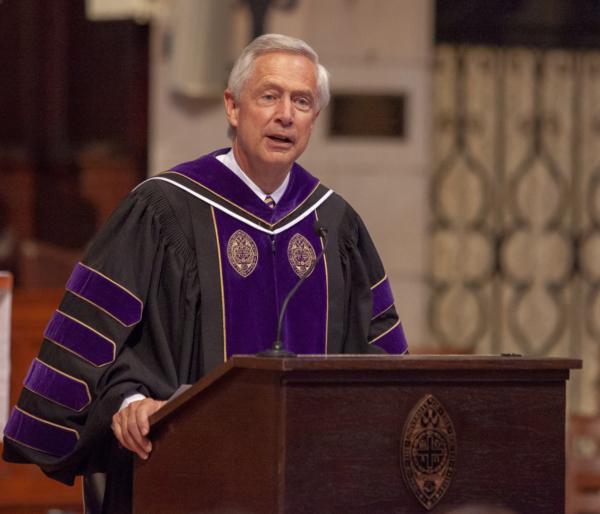 “John McCardell has served with great distinction as Sewanee’s 16th vice-chancellor,” said Skirving, who accepted McCardell’s decision on behalf of the University’s Board of Trustees. “I am thankful for the leadership and vision he has shown during a remarkable chapter in the University’s history, and I look forward to his continuing to teach in the College.”

Skirving announced that Joseph DeLozier III of Nashville, Tennessee, a 1977 graduate of Sewanee and chair of the Board of Regents, will serve as chair of a representative search committee to guide the nationwide search for a new vice-chancellor. Margaret P. McLarty of Jackson, Mississippi, a member of the Board and parent of two recent alumni, will serve as vice chair.

During McCardell’s tenure, Sewanee has enjoyed record applications to the College, expansion of the School of Theology, and increasing recognition as a leading national liberal arts university.

Under his leadership, the Stronger Truer Sewanee fundraising campaign eclipsed its original $250 million goal last February, ahead of schedule. The campaign was marked by increased commitments for scholarships, academic support, construction of new campus facilities, and support for the School of Theology. McCardell has led several endeavors with the aim of making an excellent college education more accessible for more of the nation’s best students and continues to lead an effort to achieve the University’s goal of meeting full financial need for admitted students.

The School of Theology has increased its reach through the expansion of the Beecken Center—a lively collaborative learning center for lay and clergy education and ministry, and the seminary—to include students from the entire breadth of The Episcopal Church and the Anglican communion. McCardell also laid the groundwork for moving the School of Theology from its current location to a newly renovated facility in central campus.

“To have been entrusted with the leadership of the University of the South is a responsibility and an honor for which Bonnie and I will be forever grateful,” said McCardell. “Though the time has come for me to announce that this will be my last year as vice-chancellor, this is not retirement. My plan is to return, after a period of recharging, to part-time teaching in the Department of History. I very much look forward to that.”

###
The University of the South comprises a nationally recognized College of Liberal Arts and Sciences, a School of Letters, and a distinguished School of Theology (the seminary and the Beecken Center) serving The Episcopal Church. Located on 13,000 acres atop Tennessee’s Cumberland Plateau in Sewanee, Tennessee. The University enrolls 1,700 undergraduates and approximately 170 seminarians in master’s and doctoral programs annually.
###