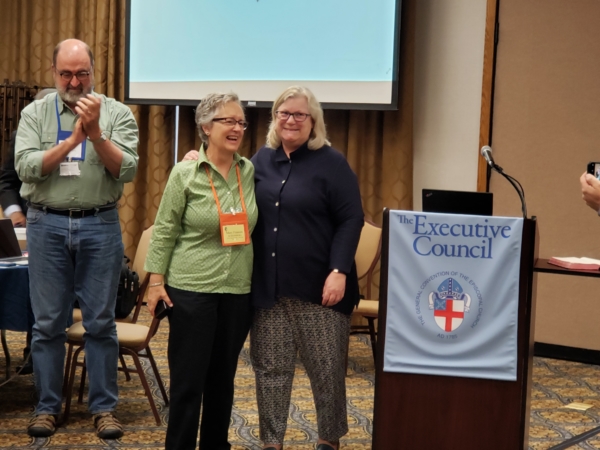 Mary Frances Schjonberg, longtime senior editor and reporter for Episcopal News Service, was awarded the House of Deputies medal on June 10 by the Rev. Gay Clark Jennings, president of the Episcopal Church’s House of Deputies. Schjonberg, a journalist with more than 40 years of experience, will retire on July 1.

In presenting the award during the opening session of the church’s Executive Council meeting in Linthicum Heights, Maryland, Jennings said, Schjonberg’s journalistic standards and integrity “set a standard not only for all other journalists, both in and out of the church, but for all of us whose job it is to govern the church and to make that governance transparent.

“She has always—always—advocated for, and sometimes, when it was necessary, fought for, transparency in governance. Even when it was unpopular. Even when there was a cost for her. We all owe her considerable gratitude for her uncompromising standards.”

Jennings praised Schjonberg’s commitment to balanced and comprehensive reporting. “I can tell you that one of the reasons her stories are so good is that she asks perceptive questions, she goes out of her way to talk with people on all sides of an issue, and she seeks out people who are not just the usual suspects,” she said. “As a usual suspect, I am particularly grateful for that.”

Schjonberg, who was ordained a priest in 2001, joined Episcopal News Service in 2005. Her reporting has included the election and tenures of Presiding Bishop Katharine Jefferts Schori and Presiding Bishop Michael Curry, the story of Bishop Gene Robinson’s election and episcopacy, and the church’s move toward the full inclusion of LGBTQ people. When her retirement was announced, Schjonberg said, “I have been blessed to have what all journalists hope for: the chance to witness history and be able to write about it.”

In retirement, Schjonberg and her spouse, Sharon Babb, will continue to live on the New Jersey shore, where she will pursue freelance writing and supply preaching.

Jennings, who was first elected at the 77th General Convention in 2012, established the medal in October of that year to honor clergy and laypeople who have given distinguished service to the House of Deputies and the Episcopal Church.

The triennial General Convention is the governing body of The Episcopal Church and includes the House of Bishops and the House of Deputies.