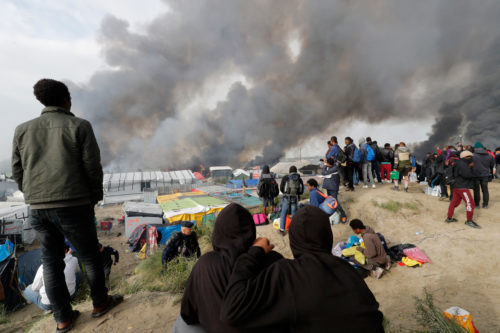 Migrants look at burning makeshift shelters and tents in the “Jungle” on the third day of their evacuation and transfer to reception centers in France, as part of the dismantlement of the camp in Calais, France, Oct. 26. Photo: REUTERS/Philippe Wojazer

[Episcopal News Service] Last December, I accompanied the dean of the Episcopal Cathedral of the Holy Trinity in Paris, the Very Rev. Lucinda Laird, and a group of volunteers from the cathedral to go and visit the Calais migrants camp, known as “The Jungle.” Or the biggest bidonville in France.

The word “bidonville” comes from the French for “jerrycan,” the metal gasoline bottles once seen riding on the back of World War II jeeps. Discarded ones are cut up to make dwellings, along with boards, canvas, plastic sheets, sheets of metal roofing, and so on. An agglomeration of these bidons becomes the “ville,” the city. In other words, a bidonville is a slum, always found on the edges of cities. There are plenty of terms to describe these, the world’s offscourings: favelas in Brazil, colonias populares (“people’s colonies”) in Mexico, villas miserias (“misery cities”) in Argentina, poblaciones callampas (dwellings that grow like mushrooms) in Chili, umjondolo (shacks) in South Africa, shammasa in Sudan, iskwaters in the Philippines. Bidonvilles are ubiquitous.

As I walked through the Calais camp that day in a driving cold rain, slipping in the gray mud, I was reminded of other camps I’d visited that were created entirely by the people who had clustered together. The classic refugee camps one visits that are built by governments or the U.N. (such as the ones preparing to receive fleeing residents of Mosul) have a logical layout, like the military camps of the Roman legions. On the other hand, bidonvilles are organic, so to speak. They develop out of necessity, and become little cities, little communities. The tent cities of Port-au-Prince, Haiti come to mind. I remember visiting these tent communities after the 2010 earthquake. They were remarkably well-organized, confounding the economics experts who had flown in to advise the government. 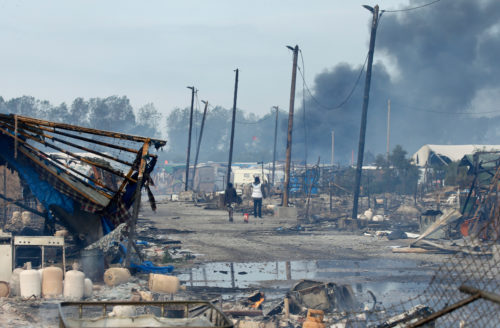 A view shows the charred debris from makeshift shelters and tents in the “Jungle” on the third day of the evacuation of migrants and transfer to reception centers in France, as part of the dismantlement of the camp in Calais, France, Oct. 26. Photo: REUTERS/Pascal Rossignol

La Jungle was no different, except that the population kept changing. As bad as life is in a bidonville, this was worse, because as soon as people settled in, they had to leave. The chaos this caused was compounded by the efforts of the United Kingdom to keep them out, for all these people were in Calais in order to cross the English Channel. In other words, they were in France illegally, since asylum seekers must go to the country in which they seek asylum. One oddity is that the U.K. has some amount of sovereignty over Calais, following the 2002 Touquet treaty with France accompanying the use of the Channel Tunnel. (It also gives France rights in Dover, as well, but there is no migrant problem there.) I saw miles of expensive, high-tech double fences topped with glistening razor wire, like a prison; paid for by the U.K.

And like a prison, the Jungle is surrounded by heavily armed national police, tough officers who regularly battle demonstrators in the streets of French cities. They intervene routinely in the fights that break out, or the fires that are accidentally or deliberately set. Of course, these improvised dwellings are mostly flammable, easily turning into a hot blaze.

Now they are disappearing, the French government having decided to eradicate the Jungle for good. Thousands are being bussed as I write this, all around France. They go to new “welcome and orientation centers,” in small groups. The very first group of 10 was reportedly dropped off in the town of Chardonnay yesterday.

Because of my experience as co-founder and president of l’Association d’entraide aux minorités d’Orient (“Association to help Eastern minorities” or AEMO) — a refugee ministry to people threatened with death for reasons of faith — I am well aware what these Calais migrants now face. Firstly, one is granted “subsidiary protection” for two years, which includes medical care, a little money, and a place to sleep, school for the kids, and French lessons. Then you have to make a case for political asylum to the Office for Protection of Refugees and Stateless People (OFPRA). You meet an official who listens to your story, usually with an interpreter, and then some time later you get a reply. One can appeal a negative decision, and occasionally reversals do happen. Being granted asylum means starting a new life, with a stipend, an apartment, medical care, French lessons, a work permit, and eventually French nationality. 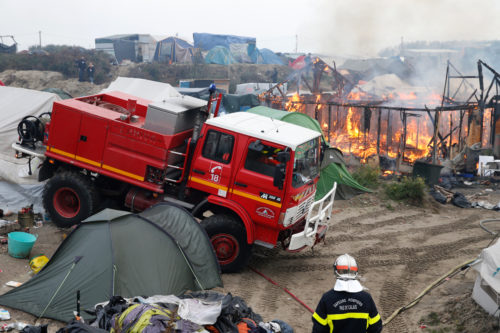 French firemen work near burning makeshift shelters in the “Jungle” on the third day of the evacuation and transfer of migrants to reception centers in France, as part of the dismantlement of the camp in Calais, France, Oct. 26. Photo: REUTERS/Pascal Rossignol

Historically, France has been the most or the second-most solicited nation in the world for asylum. Some, like Saudi Arabia, do not grant it at all. “The land of asylum” is a popular phrase describing France, and many thousands have benefited over the decades, including at one time, American writer and political activist Eldridge Cleaver. But the refugee services have been stretched to the maximum. (AEMO no longer houses refugees in the official centers, we place them with host families, who very generously open their homes to refugees for several months on end.) With thousands who want to cross France to get into the U.K., the government has been on the horns of a dilemma: what to do with illegal asylum seekers who can’t leave?

The dismantling of the Jungle has taken far longer than it should have. Letting minors into the U.K. to be reunited with family has taken far longer than it should have. While the Church of England has tried to change people’s minds — Archbishop of Canterbury Justin Welby hosts a refugee family at Lambeth Palace — the Brexit vote has made welcoming refugees politically difficult. The politics of fear in the U.K. and the inertia of the French government combined into a perfect storm for thousands of people left in that cold gray mud. What will become of them now, who find themselves offered a place in a country they did not desire, and which has so far given them no reason to want it now? The “Leave” voters gave the refugees their reply: go anywhere but here. These refugees are the first casualties of the “post-truth” era in Britain, in which brazenly lying billboards announced the imminent arrival of 72 million Turks, while Turkey is not in the European Union and now has no chance of getting in.

The unsung heroes of the story have been the many incredibly selfless volunteers and associations who made it their business to show the Jungle refugees the face of kindness, of acceptance, of welcome. This includes members of the Episcopal Cathedral in Paris, who have given a great deal out of compassion. We sent truckloads of clothes, socks, blankets; people supported the local associations financially with collections; we refitted a camping car into a mobile nursing unit. Parishioners visited, giving what they could. Many others showed up as well, working tirelessly among the rapidly changing residents, braving the elements with them, building shelters, providing meals and clothing, and a sympathetic ear. It is humbling to be their bishop.

As this chapter of our guests ends, and a new and uncertain one begins, I want to say that I hope the thousands getting on buses this week will find a welcome across this Texas-size country. I hope they can find some peace at last. AEMO has resettled 3,500 people, bringing them out of Iraq to safety in France, mostly Christians but also Muslims as well. It is a hard journey for anyone to make with a visa, never mind without papers.

But I fear the era of new bidonvilles might be commencing. When will this massive movement of peoples end? The aging peoples of Europe (except the Irish and the French) cannot pay out pensions without a new influx of young workers. Today’s billion Africans will likely become two billion by 2050. Not to mention the desperate, angry millions in the Middle East. In Pakistan and India. And yes, China too. Will the West know what to do? And will the churches of the West lead, or hide? Will we be the sheep of Jesus’ parable, who saw him among the wretched and sought to help, or among the goats who refused?

— The Rt. Rev. Pierre Whalon is bishop in charge of the Convocation of Episcopal Churches in Europe.