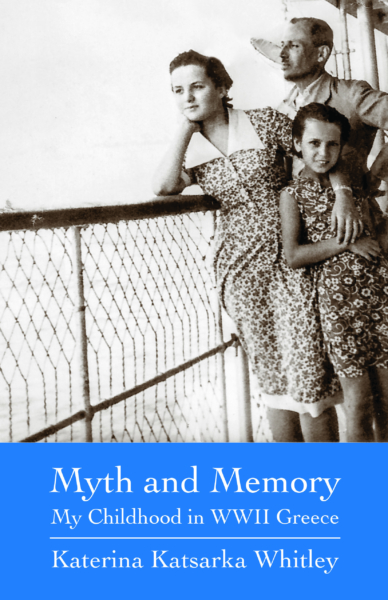 In her latest book, Myth and Memory: My Childhood in World War II Greece, Katerina Katsarka Whitley, acclaimed Episcopal author and speaker, recounts the dramatic days leading up to—and following—the Nazi occupation of Greece. She paints a colorful portrait of the small but thriving evangelical community in Thessaloniki, the Greek city Paul addresses in his New Testament epistle, as she follows the daily life of a prominent religious family navigating their way through the war and its aftermath. Against this backdrop, the book examines the meaning of faith and documents Whitley’s journey to an expanded understanding of Christianity that she later found in the Episcopal Church. Illustrated with photographs, maps, and excerpts from her father’s journals, the book culminates with her arrival in the United States as a college student in the 1950s.

Whitley is the author of Around a Greek Table: Recipes & Stories Arranged According to the Liturgical Seasons of the Eastern Church; Waiting for the Wonder: Voices of Advent; Speaking for Ourselves; and many other books.

Whitley, a member of Holy Cross parish in Boone, North Carolina, is well known in Episcopal circles. During the 1990s, she served as communications and public relations associate for the Presiding Bishop’s Fund for World Relief (now Episcopal Relief and Development). She visited 26 countries, including Mozambique, Lebanon, and South Africa, to listen to—and share—the stories of women and children suffering the miseries of civil war. She also traveled widely within the United States to promote the efforts of the Presiding Bishop’s Fund and to raise money for domestic and overseas needs.

Whitley has been a beloved speaker at countless Episcopal parishes, including Christ Church, Charlotte; St. Paul’s, Rochester, and St. John’s, Huntington and Cold Spring Harbor, as well as a number of parishes across the south, including St. Mark’s, San Antonio. She has been a featured speaker at many diocesan conventions and has been a contributor to the website Sermons that Work since 1992. She has taught communication for more than twenty years at Appalachian State University in Boone, NC.

Whitley is beloved for her dramatic readings, which have provided spiritual inspiration to countless listeners. Today, she devotes herself to writing, leading workshops, and conducting retreats.

Myth and Memory, published on December 1, 2020 by Applecart Press LLC,  is available from amazon.com and through the publisher. Katerina is available for speaking engagements. Contact her through her publisher at dublinliterary@gmail.com or directly at mythandmemorybook@gmail.com.