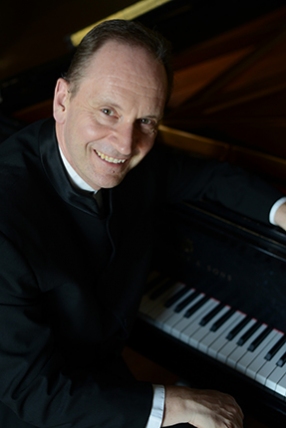 The Rector, Wardens and Vestry of Saint Thomas Church Fifth Avenue announce that Dr. Jeremy Filsell has been called as Organist and Director of Music to succeed Daniel Hyde who is returning to the prestigious King’s College, Cambridge in the Spring of 2019.

As a U.S. Citizen and a British subject, Jeremy is uniquely placed to lead the finest professional choir of men and boys in North America, whose life owes much to the great English choral tradition since T. Tertius Noble was invited to found the Saint Thomas Choir School in 1919.

“I am very excited to welcome Jeremy to join a hard-working team at Saint Thomas Church and to build on the great legacy of his predecessors. Jeremy not only has an international reputation on the organ, but is also passionate about music changing peoples’ lives, and I know how much he is looking forward to leading our Choir as its unique Choir School celebrates the centenary of its founding,” said the Rector, Canon Carl Turner.

At the beginning of October, the Church celebrated the completion of a ten-year organ project dedicated to the memory of the late John Scott, who died suddenly in 2015. Nearly 3000 people heard the organ over that weekend when Daniel Hyde played to a capacity audience, and then the organ was used at two spectacular liturgies and a second organ recital by Associate Organist, Benjamin Sheen.

Jeremy Filsell currently combines an international recital and teaching career with being director of music at Saint Alban’s Episcopal Church, Washington DC, Artist-in-Residence at Washington National Cathedral, and Professor of Organ at the Peabody Conservatory in Baltimore. He previously served as Director of Music at the Church of the Epiphany in downtown Washington DC and as Principal Organist of the Basilica of the National Shrine in Washington DC. He is currently Dean of the DC Chapter of the American Guild of Organists.

“I am honored, delighted and humbled to be asked by Fr. Turner to take up the musical reins at St. Thomas,” says Jeremy, “and to follow in the footsteps of some remarkable recent musicians. Both Gerre Hancock and John Scott were iconic musicians for me and Daniel Hyde has, in recent times, continued to build the choir’s excellence and international reputation that they established. It will be a huge pleasure to succeed Daniel and to try and extend that formidable legacy. With a new organ now in place and the choir school set to celebrate its 100th anniversary next year, there are undoubtedly exciting times ahead.”

Jeremy Filsell has been hailed as one of only a few virtuoso performers as both pianist and organist. He has appeared as a solo pianist in Russia, Scandinavia, New Zealand and throughout the USA and UK. His concerto repertoire encompasses Bach, Mozart and Beethoven through to Shostakovich, John Ireland and Rachmaninov. He has recorded the solo piano music of Herbert Howells, Bernard Stevens, Eugene Goossens and Johann Eschmann and recently released were discs of Litaize’s organ music, Rachmaninov’s first and second piano concertos and two of French Mélodies accompanying Michael Bundy (baritone). Jeremy is on the international roster of Steinway Piano Artists and has recorded for BBC Radio 3, USA, and Scandinavian radio networks in solo and concerto roles.

His discography comprises more than 35 solo recordings. Gramophone magazine commented on the series of 12 CDs comprising the première recordings of Marcel Dupré’s complete organ works for Guild that it was ‘one of the greatest achievements in organ recording’. In 2005, Signum released a 3-disc set of the six organ symphonies of Louis Vierne, recorded on the 1890 Cavaillé-Coll organ in St. Ouen, Rouen, BBC Radio 3’s Discs of the Week.

He has taught at universities, summer schools, and conventions in both the UK and USA and has served on international competition juries in England and Switzerland. Recent solo engagements have taken him across the USA and UK and to Germany, France, Finland, Sweden, Norway, Australia and New Zealand. In North America, he concertizes under the auspices of Philip Truckenbrod Concert Artists.

As a student of Nicolas Kynaston and Daniel Roth, Jeremy Filsell studied as an Organ Scholar at Keble College, Oxford University before completing graduate studies in piano with David Parkhouse and Hilary McNamara at the Royal College of Music. He was awarded a PhD in Musicology at Birmingham Conservatoire/BCU for research involving aesthetic and interpretative issues in the music of Marcel Dupré.

A former Assistant Organist of Ely Cathedral and Director of Music at St. Luke’s Chelsea in London, before moving to the USA in 2008, Jeremy held Academic and Performance lectureships at the Royal Academy of Music in London and the Royal Northern College of Music in Manchester, and was a lay clerk in the Queen’s choir at St. George’s Chapel, Windsor Castle.

You can read more about Jeremy at his website: www.jeremyfilsell.com.