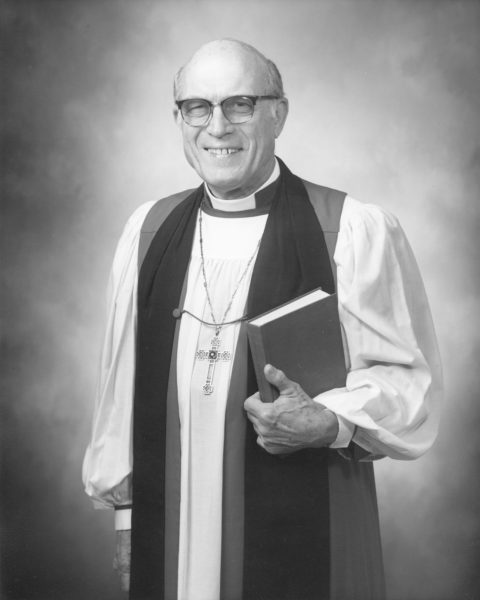 A church friend was recently encountering the short stories of 20th century southern writer Flannery O’Connor for the first time. Like many before her, she was confused and frustrated. The story she had just read was “A Good Man Is Hard to Find.”

“There’s not a single good man in the whole story!” she protested to me. And of course she was right. Because a good man – a truly good man – is, as O’Connor pointed out, very hard to find.

My experience, however, is that the Rt. Rev. Duncan M. Gray Jr. was just such a man – a truly good one.

In the mid-1990s I began conversations with him that eventually developed into a biography. The conversations began with a personal interest: Bishop Gray had been rector of St. Peter’s Episcopal Church in Oxford, Mississippi in the late 1950s and early 1960s as I was growing up there. During that time, when I was in my early teens, a man by the name of James Meredith Jr. enrolled as a student at the University of Mississippi in the fall of 1962. What was unusual about Meredith is that he was the first African-American to enroll at the university, which was just west of town and of where my family lived. His eventual enrollment was a protracted process as the government of Mississippi did all it could to prevent it. Finally the state ran out of options to prevent his enrollment, and Meredith, with the help of the federal government, registered for classes. But that did not occur until after a riot broke out on the campus; three people were killed, federal marshals were called in, as well as more than 20,000 federal troops to quell the violence and ensure Meredith’s registration.

In the months preceding, Oxford and the university, with a total population of about 10,000 at the time, had been in turmoil over Meredith’s possible enrollment. Duncan Gray was one of the few public Christian voices there urging Meredith’s acceptance and counseling against violence. On the night of the riot, he traveled the short distance from the church to the campus and waded into the midst of riot, urging students and those from elsewhere to put down their rocks and bottles and other weapons.

He was collared by some of the rioters who seemed prepared to beat him up until he was rescued by a sheriff’s deputy and some students. It was not the first time he had risked his life to speak out for peace and justice in Mississippi, nor would it be the last. I heard about some of this in Oxford as a teenaged member of St. Peter’s, but I also heard many verbal attacks on our rector, including some from members of our congregation. Many years had passed though, and my memories were vague. In 1995, here was a chance to hear the story again from Gray himself.

As I listened, I learned that the Oxford story was just a piece of that longer story of Gray’s actions on behalf of justice for African-Americans. The first had come when he was a senior in seminary at the University of the South in Sewanee, Tennessee. The university and the divinity school administration and boards were debating in 1953 whether to admit African-Americans to the seminary. Gray led a student movement designed to convince those in power to do so. His uncle, the vice chancellor of the university, was opposed to the move as were many members of the board. Warned by lawyers of the upcoming decision on Brown v. Board of Education, the board reluctantly voted “to consider” all applications submitted to it. In the summer of 1953 the first African-American student was admitted.

By then, Gray had graduated and been assigned to a parish in the Mississippi Delta. Soon it was 1954, the year the Brown decision was handed down and the year that the White Citizen’s Council began to form in the next county over. Turmoil over school desegregation grew throughout the south, yet once again Gray took the lead in creating a document titled “The Church Considers the Supreme Court Decision,” a document that strongly supported public schools as central to democracy and declared forthrightly that “segregation is incompatible with the Christian gospel.” The pamphlet attracted national attention, but earned Gray enmity among many Mississippians, including members of his own parish. Eventually one local threatened his life on the main street of town.

As Gray and I talked, I learned that these actions and others like them were emblematic of his priesthood. After he left Oxford, motivated in part by parishioners’ opposition to his views and their consequent drop in giving, he moved to Meridian, Mississippi where he became rector at St. Paul’s Episcopal Church in 1965, shortly after the murder of three civil rights workers in nearby Philadelphia. Meridian was in the grip of an F.B.I. investigation of the murders and also the rise of a reign of terror by the White Knights of the Ku Klux Klan. Once again, Gray took a lead in speaking out against racism and violence.

So when in 1974, Episcopalians in Mississippi elected Gray as their bishop it seemed astounding. Yes, passions had cooled somewhat from their height in the fifties and sixties, but I am convinced that his election said more than that. It spoke of the kind of man he was: not only faithful and brave in speaking out for justice and nonviolence, but also a man who both publicly and private was gentle and humble and simply good in a way that few of us are. As one of his opponents who refused to listen to Gray’s sermons but perused the hymnal instead told me, “He was a real Christian.”

When I was working on my biography of Gray, I had occasion to remark to his wife on what I had observed about his goodness. She responded, “Yes. And you know what’s so wonderful is that he doesn’t even know it.”

Let us thank God for his life and his witness.

— Araminta Stone Johnston is a retired professor of religion at Duke University and author of “One Was a Priest: The Life and Times of Duncan M. Gray Jr. [University Press of Mississippi, 2011]”