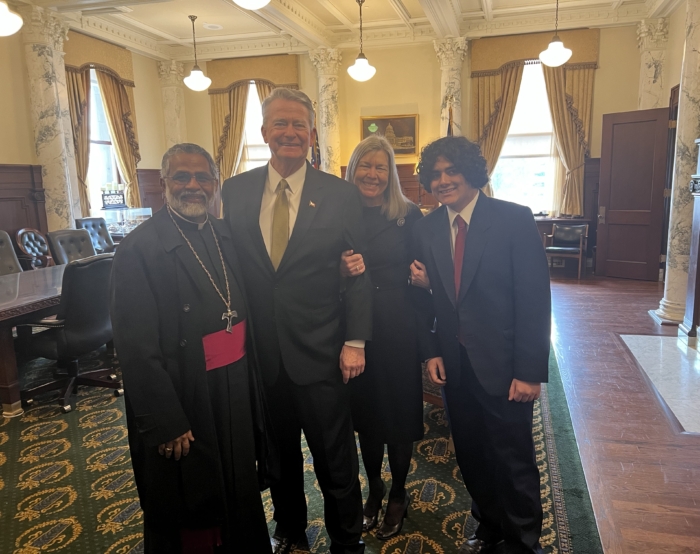 The Rt. Rev. Jos Tharakan of the Episcopal Church in Idaho was an honored guest at the State of Idaho’s 2023 Inauguration Ceremony at which Governor Brad Little and other elected officials took their oaths of office. Tharakan offered the opening prayer of the ceremony in which he encouraged those taking their oaths to work to “eradicate homelessness, end hunger, and meet the healthcare needs of our people” and “respect the dignity of all people, regardless of their origin, orientation, or religious affiliation.”

Little, who is serving his second term as Governor, is a member of the Episcopal church and regularly attends St. Mary’s Episcopal Church in his native Emmett, as well as St. Michael’s Cathedral in Boise, where he and his family attended a special service prior to the inauguration ceremony.

The Rt. Rev. Joseph ‘Jos’ Tharakan was ordained and consecrated the 14th bishop of the Episcopal Diocese of Idaho on June 25, 2022. A native of Kerala, India, Tharakan previously served as the rector of St. James Episcopal Church in Springfield, Missouri as well as dean of the Southern Deanery of the Diocese of West Missouri. He graduated from Franciscan Seminaries in Kerala and holds degrees in Economics and Political Science from the University of Delhi, and English and Social Sciences from the University of Bhopal, India.

About the Episcopal Church in Idaho

The Episcopal Church in Idaho is comprised of 27 congregations and over 70 outreach ministries in southern Idaho. For more information, visit www.episcopalidaho.org.