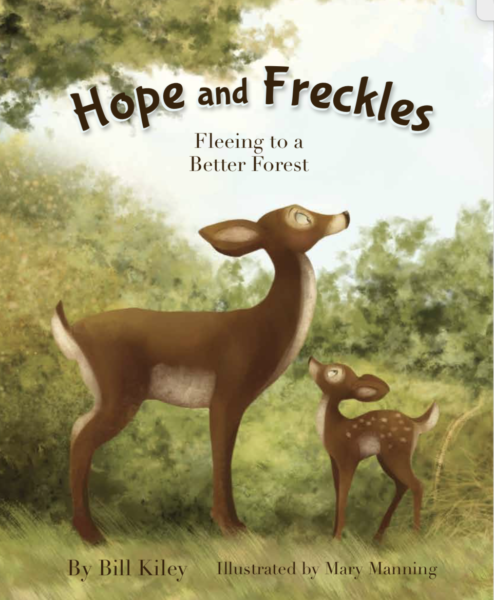 Hope and Freckles tells the story of millions of refugees and asylum seekers around the globe.

Mascot Books announces the JUNE 1st release of Hope and Freckles: Fleeing to a Better Forest written by Bill Kiley with illustrations by Mary Manning.

Hope and Freckles: Fleeing to a Better Forest teaches children in a creative way about the plight of refugees and asylum seekers around the world. The story follows Hope, a white-tailed deer, and her spotted Fawn, Freckles, who must abandon their home in search of a safer and more bountiful forest. When they arrive at this new forest, they are faced with a new set of hardships. They are forbidden to enter the forest until their residency is approved, they must wait for these residency results in a fenced-in area, and—most alarmingly—they are separated from each other. Bill Kiley smartly shows the adversity that refugees around the world must endure in a way that young children can understand. The back of the book is informative and interactive, featuring more information about refugees and asylums, resources for more information, and discussion questions.

Author Bill Kiley has led an extensive and impressive career. Bill holds two Master of Science degrees, and is a graduate of the F.B.I. National Academy in Quantico and the U.S. Army Command and General Staff College. He is a retired Deputy Police Chief and a retired Colonel from the U.S. Army, has served as an adjunct professor of Criminal Justice at Suffolk County Community College and at Long Island University, and is the former President of the International Association for Property and Evidence, Inc. Additionally, Bill is the Past President of the New York State and Eastern Canada Chapter of the F.B.I. National Academy Associates.

Bill resides on Long Island, New York with his wife of forty-eight years, Kathy. A grandfather of five granddaughters, he understands the impact children’s books can have on growing minds. He hopes that Hope and Freckles: Fleeing to a Better Forest can help children to understand and empathize with the many refugees and asylum seekers around the world.