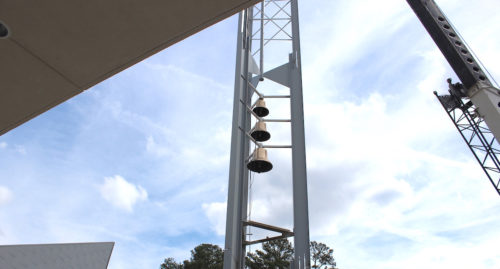 “It’s a holy and hard work,” said the Rev. Joshua Case, the Atlanta church’s associate rector for mission, about building the Tower of the Holy Innocents to honor the Holy Innocents of Our Day, as church officials call them. “This is our statement to people who threaten children in our state,” said Case. “And our statement to the children, that they can come here and be safe, come here and find a resting place.”

More than 300 children die as a result of violence in Georgia each year. It is not known yet which children will be buried in the columbarium. “We’ll work with the diocese and state commissions to see what that will look like,” said Case.

One bronze bell in the tower (the smallest) is from the original church in downtown Atlanta, which traces its roots back to the late 1800s. The other two were made by the Verdin Bell Co., a family-owned, six-generation business in Cincinnati that was founded in 1842. Each bell has its own tone, and, together, the bells create what is called a “peal,” a prolonged ringing of bells that are tuned to one another.

A group of church stewards provided funding for the tower and columbarium as a gift to the church, which held its first Requiem Mass and prayer vigil to honor Georgia children who lost their lives to abuse and violence in 2012. “As hard as it is to say, many children and teens die at the hands of violence each year and end up in unmarked graves,” explained the Rev. Michael R. Sullivan, rector of Holy Innocents’. “Too often we look the other way because it’s just too horrendous to face. But as Christians—and particularly as a parish church named for the innocent children killed by King Herod in an attempt to rid the world of Jesus — we must not look away.

“By building this tower and providing a sacred place for burial, we will be claiming our name more boldly, but, more importantly, becoming a beacon of hope for Metro Atlanta.”

The tower is the work of iron sculptor Andrew Crawford and Tom Ventulett, the congregation’s resident architect.

The bells will peal for the first time during Holy Innocents’ Easter Vigil, March 26. Thereafter, they will ring on Sundays, and on special occasions such as weddings and funerals.

“I am elated that such a momentous gift will now grace our church,” said Sullivan. “It really will stand as a testimony to our name and God’s claim of resurrection amidst darkness.”