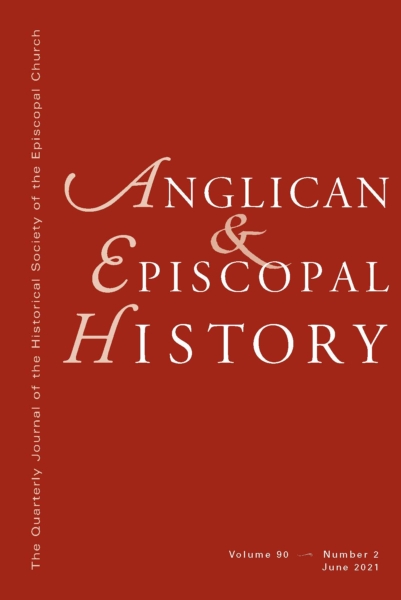 This issue of AEH also marks the final one for Ed Bond as editor-in-chief. Bond, an expert in the history of colonial Virginia, is retiring after long-time service that began in 2007.

In Bond’s final issue, the lead study examines ways Anglo-Catholicism and Confederate sympathies in England influenced fundraising efforts for the University of the South, Sewanee, led by the then-Episcopal Bishop of Tennessee.

In this study, Sewanee church history professor Benjamin J. King calls for a closer examination of cotton manufacturing connections between England and the American South. He argues that “such research opens up a new field of enquiry in ecclesiastical and Confederate history by examining those lay and ordained Tractarians in Britain who were Confederate supporters.”

King’s study is titled “Church, Cotton, and Confederates: What Bishop Charles Todd Quintard’s Fundraising Trips to Great Britain Reveal About Some Nineteenth-Century Anglo-Catholics.” He shared an earlier version of this study with the Anglo-Catholic Historical Society.

Using Theophilus Lindsey (1723-1808) as a case study, Ney warns that, “The story of the genesis of the Unitarian Church invites clergy, liturgists, and worship leaders to consider whether what is corporately prayed (and sung) accords with what is said to be believed.” Lindsey, a Church of England priest, later founded the Unitarian church in England and introduced his own revised Book of Common Prayer in 1774.

Ney is a priest in the Anglican Church of Canada and associate professor of church history at Trinity Episcopal School for Ministry in Ambridge, Pa.

Church review editor J. Barrington Bates examines ongoing adaptations to worship during the covid pandemic. He examines ways Rockefeller Chapel at the University of Chicago has used podcasts during “coronatide.” Other reviews examine a Triduum custom among Lutheran seminarians in Philadelphia and Gettysburg, Pa., and Sunday worship at St. Ursula’s Anglican Church in Bern, Switzerland, part of the Church of England’s Diocese in Europe.