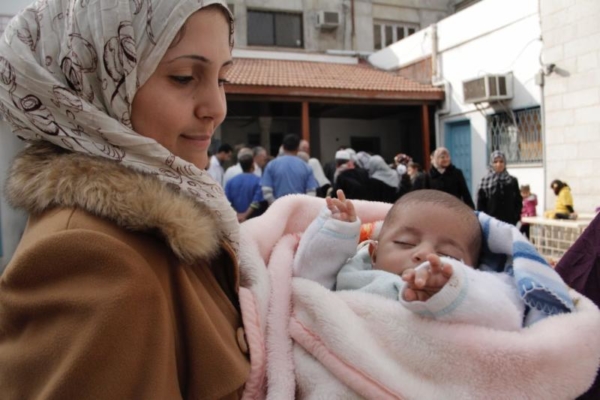 While the leaders of Ahli Arab Hospital in Gaza rarely start the day with good news, one morning in mid-May was the exception for Ahli’s director, Suhaila Tarazi. She awoke to word that the American Friends of the Episcopal Diocese of Jerusalem (AFEDJ) was awarded a grant from the Harold C. Smith Foundation to enable the hospital’s free community clinic to expand from one day to two days each week to allow an additional 4,500 patients to be cared for over the next 12 months.

Founded in 1882 and run by the Episcopal Diocese of Jerusalem since the 1950s, Ahli Arab Hospital is the one of the few charitable hospitals and the only Christian hospital in the Gaza Strip, home to 2 million people most of whom are Palestinian refugees. Ahli Arab Hospital operates in a region where the public healthcare system is nearing collapse.

“Gaza is still under siege. All borders are closed. Living conditions are unbearable. In the midst of Gaza’s crisis, Ahli Hospital is a place of refuge and hope. Everyone who comes to Ahli for help is met with dignity and respect. We are living these Christian values every day. People know this,” Tarazi explained.

“In the midst of the dark nights of Gaza, this grant is a big moon shining to draw a huge smile on hundreds of children’s and women’s faces, those who have lost the hope of a better life out of the miserable condition they are living under. We at Ahli Arab Hospital are grateful to the generosity of Harold C. Smith Foundation and American Friends of the Episcopal Diocese of Jerusalem. Through their support Ahli will continue to offer hope to the hopeless and continue working for reconciliation, peace, and justice in the Holy Land”.

The grant, which totals $468,572, will extend the access for assessment and treatment of underweight and malnourished children to an additional 400 children and offer care to 300 children with severe burns. By expanding the clinic to a second day 650 more children and 300 caregivers will receive psychosocial support for trauma, and 800 additional women will be screened for early detection of breast cancer. The grant will increase the capacity of Ahli Hospital to treat many more adults with a range of chronic illnesses and offer general surgeries for adults and ENT surgeries for children as well as treat those who come to the clinic for common medical needs. Despite this increased ability to serve the community, the demand for free medical services far outstrip the capacity of the clinic to care for all the people who need treatment. The opening of the community clinic for a second day each week also creates employment opportunities for unemployed nurses, doctors, psychosocial support staff, cleaners and other support staff who have been affected by program cuts related to the recent cuts in U.S. aid.

“We are honored to support the life-saving work of Ahli Hospital and the crucial medical services it provides to people in Gaza. There are no better organizations to partner with than AFEDJ and the Diocese of Jerusalem,” said Nancy Opalack, CEO of the Harold C. Smith Foundation.

Upon learning of the grant Archbishop Suheil Dawani, the leader of the Episcopal Diocese of Jerusalem, said, “This contribution will go a long way in relieving the suffering faced by poor and needy patients in Gaza, who otherwise might be kept from receiving the medical treatment they so desperately need.”

“Ahli supporters have responded with incredible generosity,” John Lent, executive director of AFEDJ, commented. “The Harold C. Smith Foundation grant has will transform thousands of lives by extending access to free medical services for many families in the Beach and Jabalia refugee camps, which are home to some of the poorest neighborhoods in Gaza City. The Harold C. Smith Foundation grant amplifies the generosity of our individual and church supporters. Together we are helping Ahli Hospital offer ministries of healing in a region where it’s needed the most.”

He continued, “Considering the current conditions in Gaza and the pressures faced by Ahli leaders, it is no exaggeration to say that the generosity of Ahli Hospital donors and AFEDJ’s funding partners saves the lives of many incredibly vulnerable children and adults. There is no understating the importance of keeping the doors of Ahli open to all.”