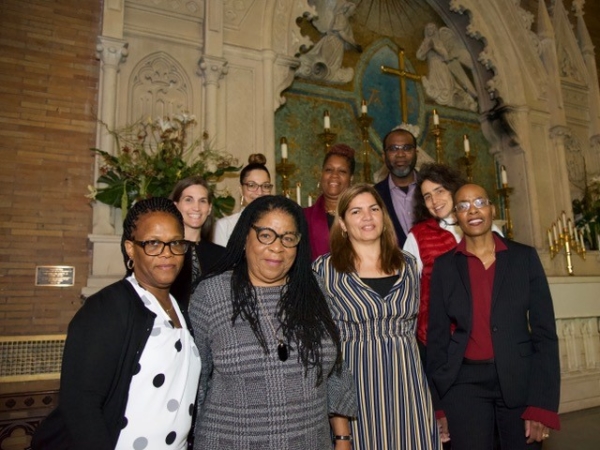 On Tuesday, May 14, St. Philip’s Episcopal Church in Harlem hosted its third event in the #KnowJusticeHarlem series, featuring author Ms. Susan Burton and a panel of women and mothers impacted by the criminal justice system. The event launches a year of celebration marking the 210th anniversary of St. Philip’s, the first African American Episcopal Church in New York City.

The number of women in prisons across the U.S. has increased by over 700 percent since 1970, according to the Vera Institute of Justice. While male incarceration rates are declining in many parts of the country, women remain the fastest growing population in prisons and jails and 80% of incarcerated women are mothers.

Father Terence Lee welcomed roughly 200 people to St. Philip’s, and introduced Barbara Barron, President of the Circles of Support Advisory Board, who made initial remarks about the realities of coming home from prison as a woman. The evening’s keynote speaker, Ms. Susan Burton, discussed stories from her book Becoming Ms. Burton about women’s experience in the justice system. She inspired the audience with the story of resilience of Ingrid, who was formerly incarcerated and now fights tirelessly for the wellbeing of her grandchildren and children, from whom she was separated from for much of their childhood.

Dean Kelly Brown Douglas of the Episcopal Divinity School at Union Theological Seminary, urged all gathered to remember that God does not create any expendable people, but rather people who were created to live into goodness. She moderated a panel discussion featuring women and mothers who overcame personal challenges within the justice system and upon re-entry.

The panel featured Elizabeth Swavola, Senior Program Associate at the Vera Institute of Justice, who shared data and explained that most women are in jail for low-level, non-violent charges. Lanetta Hill, Senior Case Manager at MICA, described her experiences of parenting her three children from prison, and not wanting to waste time sleeping during the precious hours of the occasional overnight visits she received from them while incarcerated. Afrika Owes, Administrative Associate at the Center for Constitutional Rights, talked about her experience on Riker’s Island as a teenager, the community of support who fought together for her release, and the work she is now doing to mentor young women. Diana Ortiz, Vice President at Exodus Transitional Community, told her own story and the importance of community and acceptance after returning home.

“It is extraordinary that the Episcopal churches here in Harlem and Manhattan, including Trinity Church Wall Street, Church of the Heavenly Rest, and Church of the Epiphany are joining together with grassroots organizations to accomplish initiatives like #KnowJusticeHarlem,” noted Chris Flowers, founder of the J.C. Flowers Foundation, which sponsored the event. “Together we remain committed to supporting formerly incarcerated people coming home to reunite with their families and communities.”

More information about the work of Circles of Support can be found at www.circlesofsupport.org