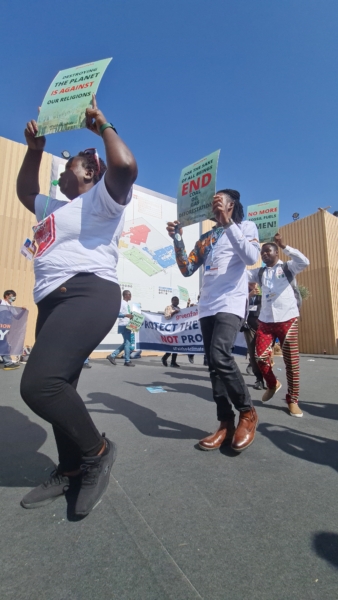 Religious activists from five continents held a demonstration this morning at COP27 where they clearly called out the Coal, Oil, and Gas corporations for the ills they have brought to their communities,  and called for a Fossil Fuel Non-Proliferation Treaty while also rebuking governments for stalled progress during the annual United Nations climate negotiations. They carried signs and banners with phrases such as “No New Fossil Fuels – AMEN” and “For the Sake of All Beings – No More Coal, Oil and Gas.”

The demonstration featured grassroots religious activists from the global South and the other parts of the world.

“My community has suffered from oil spills and toxic gas flaring since 1959,” said Friday Nbani, a grassroots Christian activist from the Niger Delta’s Ogoni land, who works with GreenFaith. “Our exposure to fossil fuels has resulted in cancer, infertility and lung diseases. My wife has asthma. We breathe air filled with soot. We eat cassava contaminated with oil. Fresh fish in the Ogoni River have oil in them. The government looks the other way. None of the profits from the oil stays in our community. People of faith must together condemn inaction on such crimes,” he said. “No religion sanctions environmental destruction.”

Baraka Lenga, an Anglican and GreenFaith organizer in Tanzania, said “The East Africa Crude Oil Pipeline (EACOP) is an assault on decency. Total Energies, EACOP’s lead partner, has displaced 1,000 families so far, small farmers who have received little or no compensation. Another 100,000 people risk displacement, loss of livelihoods and other human rights abuse.”

Lenga attended an event at COP27 where he queried an executive of MUFG Bank, Japan’s largest and an EACOP funder, about the bank’s commitment to sustainability. On a video captured by Fridays for Future Japan, the executive claimed not to know about the bank’s involvement in EACOP. 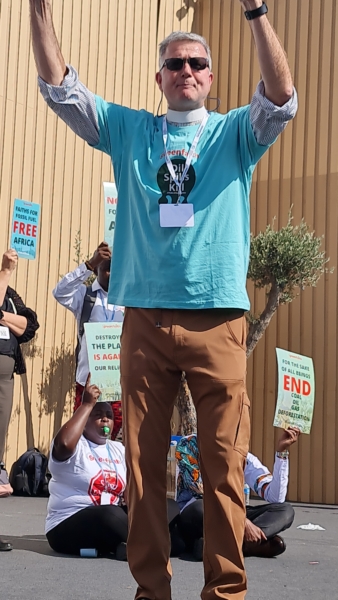 The Rev. Fletcher Harper, an Episcopal priest and the executive director of GreenFaith.

Participants in the demonstration called for a Fossil Fuel Non-Proliferation Treaty as a necessary complement to the Paris Climate Agreement. The Treaty framework has been endorsed by the countries of Vanuatu and Tuvalu, the European Parliament, 70 cities including Kolkata, Los Angeles and London, 101 Nobel Laureates, 3,000 scientists, 1,750 civil society organizations and 500 parliamentarians from Africa, Asia, Europe, and the Americas. It includes an immediate end to new fossil fuel projects, an equitable phase-out of existing coal, oil and gas production, and a generous commitment to a just transition for climate-impacted countries, communities and workers.

Religious groups representing over 2 billion people, including the Vatican, the World Council of Churches, Islamic Relief Worldwide, the Islamic Society of North America, Soka Gakkai International, Green Anglicans, Laudato Si’ Movement, GreenFaith, Australian Religious Response to Climate Change, and many others collectively announced their support for a Treaty the week before COP27 began. “Our religions teach us compassion, love and justice,” said Imam Saffet Catovic of the Islamic Society of North America. “What’s happening at COP in no way resembles those values. Fossil fuels are lethal. We need action towards a Treaty immediately.”

The religious activists also rebuked wealthy governments not only for failing to pay their $100 billion annual commitment of climate finance for developing countries, but for overstating the value of their actual payments by counting loans, for example, as equally valuable to recipient countries as grants. “Global North countries bear a disproportionate responsibility for the climate crisis,” said Meryne Warah, GreenFaith’s Global Organizing Co-Director. “Their fossil fuel corporations and financial institutions have become a force greater than nature. They must now demonstrate a different kind of strength – moral strength – and show the courage to assume responsibility for what they have done, and to make it right.”

For Jocabed Solano, an Indigenous leader from Panama, recent news that wealthy governments were planning to forgo commitments to a Loss and Damage fund for another two years represented a sign that the COP process was failing to deliver meaningful progress. “There is no explanation for such delay except cold-heartedness,” she said. “My community has lived in harmony with our local environment for thousands of years. Why can’t the wealthy see the harm that they are causing and change?”

The Rev. Fletcher Harper, an Episcopal priest and the executive director of GreenFaith, called upon COP27 to deliver immediate action.

“We are done waiting. We are done listening to promises. The Global North must have a conscience to treat people in the Global South as humans. We are tired of the lies. Let us sign the Fossil Fuels Non-Proliferation Treaty to compliment the efforts to achieve the Paris Agreement,” he said.