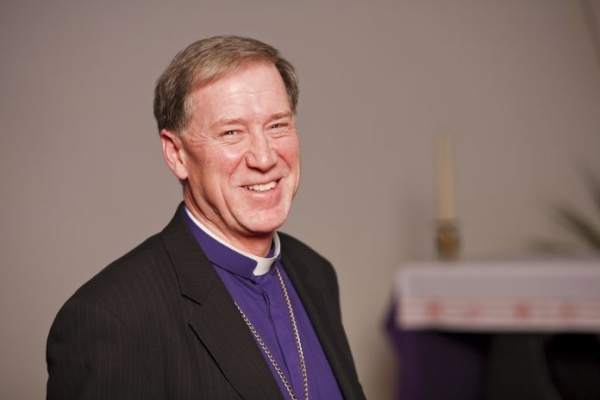 In conjunction with the annual convocation ceremony, The General Theological Seminary will bestow the degree of Doctor of Divinity, honoris causa, on Fred Hiltz, the thirteenth Archbishop of the Anglican Church of Canada, a position he held from 2007-2019. Throughout his tenure as Archbishop, Hiltz travelled extensively throughout Canada, consistently lifting up the Marks of Mission of the Anglican Communion, ecumenical work with the Evangelical Lutheran Church in Canada, and prioritized the rights of indigenous people.

At the forefront of conversations, Hiltz took an active role in the Declaration of Full Communion between The Anglican Church of Canada and The Evangelical Lutheran Church in Canada in 2001. From 2006 to 2011 he served as co-chair of The Anglican-Lutheran International Commission.

Hiltz was also a leader in action. He urged the Anglican Church of Canada to live its “Apology of 1993” which addressed the physical, emotional and sexual abuse suffered by many children in the Indian Residential Schools in Canada. The schools were established by the federal government to enforce a policy of “assimilation,” and was run by the Churches and Religious Orders. After widespread consultation with Indigenous Peoples, Hiltz offered an apology at the General Synod in 2019. By invitation he attended several Sacred Circles and meetings of The Anglican Council of Indigenous Peoples, worked closely with the National Indigenous Bishop and participated in numerous conversations with a commitment to honoring the vision of elders for the building of a truly self-determining Indigenous Church.

Convocation is scheduled tomorrow in the Chapel of the Good Shepherd at General, following the Paddock Lectures, given by the Rt. Rev. Jo Bailey Wells, “Anointed No More?: Faithful Living When Leadership & Institutions Fail.” More information at www.eventsatgeneral.com

About General Seminary
General Seminary’s mission statement was adopted in 1999 and reaffirmed in 2015: Educating and forming lay and ordained leaders for the church in a changing world. As we live out this mission, we seek to be and to become a community for whom ongoing and deepening conversion to new life in Christ is a constant goal. Our purpose is to invite and call others to that life of conversion by our own understanding of the Christian faith — biblical, historical and theological — and our ability to reflect on that faith. Located in historic Chelsea Square, our students have the diversity and opportunity of experiences that New York City has to offer. Visit us online at www.gts.edu.