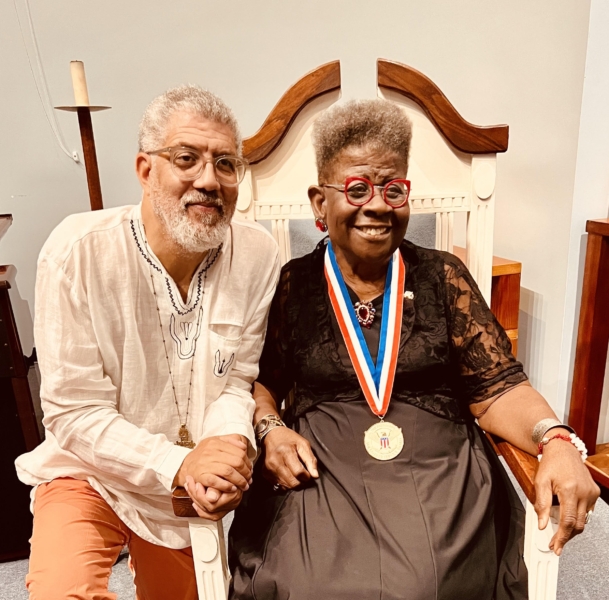 Dr. Meeks was also recognized for being a frequent media guest commentator on racial healing, editor of Living into God’s Dream: Dismantling Racism in America, and co-author of Passionate for Justice: Ida B. Wells as a Prophet of our Times.

Following the tribute featuring stirring music and inspiring presentations by leaders of the civil rights student movement, a “family reunion” style reception was held at the Absalom Jones Center. More than a dozen friends, former and current coworkers, and family regaled the 50-plus attendees with stories about Meeks from her time as a college student through her decades as a teacher and tireless worker for human equality.

Cookye Rutledge said her college friend, whom she still calls Cathy, began her activism during a 1969 student protest following the killing of an unarmed 15-year-old by a Pepperdine University security guard.

“She is the bravest person I’ve ever known,” Rutledge said. When the president threatened to take away their scholarships if they didn’t stop protesting, Meeks held her hand tightly as they walked from the president’s office and said “Don’t you cry. Don’t you let them see you cry. Listen, we know how to clean houses, we know how to wash clothes, and if we have to we’ll pick cotton, but we’re going to go to college.”

Diocese of Atlanta Bishop Rob Wright praised Meeks for her work at the Center and her personal example.

During her 25 years at Mercer University Meeks served as Instructor, Assistant Professor, and Assistant Dean of Women. While at Mercer she was recruited as a loaned executive by the Macon mayor, Jim Marshall, where she led the Macon Youth Violence Prevention Task Force for two years. That work brought her to the attention of Wesleyan College where she was recruited to be the Clara Carter Acree Distinguished Professor of Socio-Cultural Studies until retiring in 2008.

In 2017, Meeks came out of retirement when she was named by Bishop Wright as founding Director of the Absalom Jones Episcopal Center for Racial Healing in Atlanta. She has grown the Center into a resource for the entire Episcopal Church as it imagines the way forward toward building the Beloved Community. Her work has made the Center an internationally recognized resource for racial healing work.

Learn more about the work of the Absalom Jones Episcopal Center for Racial Healing and read about Dr. Meeks’ soon-to-be-released book, The Night is Long but Light Comes in the Morning: Meditations for Racial Healing.