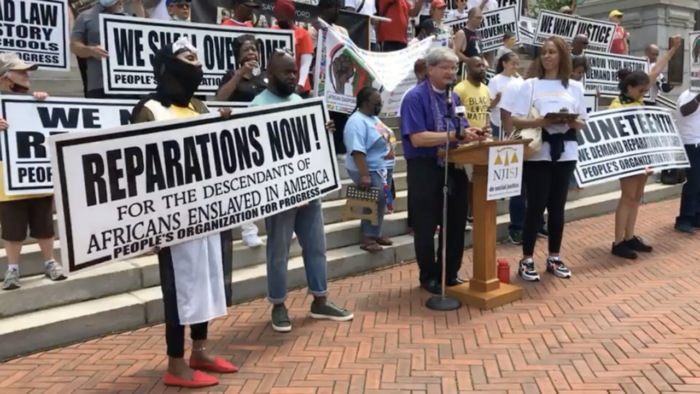 The Rt Rev William H. Stokes, Bishop of New Jersey, addresses a Say the Word: Reparations Rally in Newark earlier this year. The Diocese will participate in Thursday’s rally at the NJ Statehouse.

TRENTON – On December 2 at 11 a.m., the New Jersey Faith Allies for a Reparations Task Force/ Say the Word coalition will host a rally at the Trenton statehouse annex calling for passage of S322/A711 before the end of the current legislative session.

The pending legislation will establish a Reparations Task Force of experts to study and hold a statewide conversation about New Jersey’s history of slavery and structural racism – and their connection to the state’s current racial disparities, some of the worst in America. From that process will emerge policy recommendations for repairing the harm in New Jersey, which, due to its history, has been called the “slave state of the North.”

“While efforts sweep the country to shut down conversation in our schools about America’s history of slavery and structural racism – about the truth – it’s more important than ever that New Jersey step forward and demonstrate what it looks like when a state faces its past so it can repair its present and its future,” said the New Jersey Faith Allies for a Reparations Task Force/Say the Word coalition. “We know this conversation is necessary and long overdue because New Jersey has some of the worst racial disparities in America. Before the legislature transitions to a new session, it must prioritize this bill, say the word reparations and show that New Jersey is serious about making Black lives really matter in our state.”

More information about the Say the Word: Reparations campaign can be found here.

Published OpEds on the need for a Reparations Task Force in New Jersey are below: