[Episcopal Church Office of Public Affairs press release] The following is the sermon of Presiding Bishop Michael B. Curry presented at the opening Eucharist of the Executive Council of The Episcopal Church, currently meeting through November 18 at the Conference Center at the Maritime Institute in Linthicum Heights, Maryland.

The Most Rev. Michael B. Curry
Presiding Bishop and Primate
The Episcopal Church

Matthew 14:28-38
Peter answered him, “Lord, if it is you, command me to come to you on the water.” He said, “Come.” So Peter got out of the boat, started walking on the water, and came toward Jesus. But when he noticed the strong wind, he became frightened, and beginning to sink, he cried out, “Lord, save me!” Jesus immediately reached out his hand and caught him, saying to him, “You of little faith, why did you doubt?” When they got into the boat, the wind ceased. And those in the boat worshiped him, saying, “Truly you are the Son of God.”

This was an old gospel song based on the text of Luke 9:62. This guy wanted to follow the Jesus way, but he had a few pre-conditions. He needed to do some things first, then he would follow. That provoked Jesus to say: “No one who puts a hand to the plow and looks back is fit for the kingdom of God.”  The plowing just won’t go very well if you’re not looking where you’re going.  Keep looking forward.  Keep your eyes on the prize.

That’s what the song is saying:

The title of Maya Angelou‘s book called Wouldn’t Take Nothing for My Journey Now came from that song. 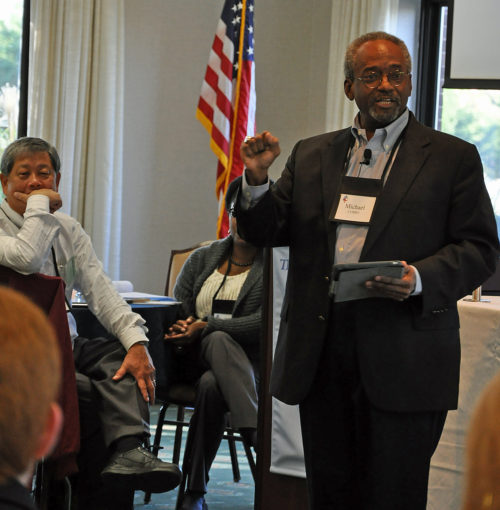 There are several stories about the apostles being on water and things happening.  One moment it is peaceful and another moment there is a torrent.

There’s a rather remarkable story about Jesus and those first of his followers, recorded in Matthew 14. The disciples are crossing the Sea of Galilee. For whatever reason Jesus wasn’t with them. It’s night. It’s dark.

Now this was in the first century, remember, there were no electric lights, so when you’re on a boat a night on the sea, it’s DARK!  I mean seriously DARK.  All you’ve got are these little lanterns.  And although I’ve been to the Sea of Galilee I haven’t seen a storm on that sea, but I’ve heard that on that particular sea conditions can change in an instant.  One minute the sea is calm, then all of the sudden it gets frightening, dangerous, perilous. The winds begin to blow.  And if you’re lantern blows out – it’s frightening.

The disciples are there in a storm. The thunder is rolling. And the lightning begins to flash. The waves beat upon them. And suddenly they are “crossing change waters,” as the old song says. And Jesus is not there. They are alone. They do everything they know to do. But the storm could overwhelm them. He’s a parable here.

Then off in the distance they see something — a shape, a figure, a form. It’s Jesus, walking on the water. And it comes closer.  Then it begins to take shape.  Closer.  They can almost see a face.  Then they see him in the mist.  Jesus walking toward them in the midst of the storm. There’s a parable here.

Everything is fine, and then a storm comes out of nowhere. And when the wind gets blowing. The wind will blow out the candles.  This is the First Century and there is no light out there.  It is dark.

Jesus is not there, but they need to keep going.  Keep going.

Now to be honest, in one sense, to us reading the story centuries later, that’s not a surprise, Jesus is able to walk on water.  He’s the Lord, like the tag line in those Geico commercials, “it’s what he does.”  He’s supposed to be able to walk on water. But for Peter to join him out there?  That’s surprising.

And Peter, not just Jesus, walks on the water. There’s a parable here.

As long as Peter is focused on Jesus he does what he would not have done on his own.

All of this while the storm is raging.
All of this passing through the danger waters.

And more than that, and this is what I think Matthew is really getting at, by being focused on Jesus, Peter is doing what Jesus is doing in the world at that moment.

As he is focused on Jesus, his feet are Jesus’ feet, his hands, the hands of Jesus, his heart, that of Jesus.  He shares and does in that moment the work of Jesus. And he walks on the water.

But as soon as he is noticing the storm, he starts sinking. And it is only when he takes his eyes off of Jesus that he then panics and begins to sink. But as long as he is focused on Jesus, he walks on the water. He does what Jesus does in the world. Not only does Peter walk on water, he gets out of the boat to follow Jesus. When he does, he finds himself doing what Jesus did in the world.

This Jesus Movement is not something new. When we focus on Jesus, instead of on the storm.  when we’re doing what he’s doing, rather than being afraid, our hearts and minds change – we are the body of Christ.

His heart is our heart. His life is our life.

Bishop Pierre Whalon of the Convocation of Episcopal Churches in Europe, issued a profound public statement last night from Paris, in light of the horror of the murders there.

Here is what Bishop Whalon wrote:

But the question of their assassins concerns not only us here and now, but the whole human race. What word do we have for these people? Our first instincts are to demonize them. . . to label them as “Islamic fundamentalists” or some such, and cheer as the bombers carry out a massive campaign in retaliation. But this is too simple. It is not what Jesus would have us do. What he wants is harder.

When we baptize or confirm people, Episcopalians always repeat the promise to “strive for justice and peace among all people”… We need therefore to chart a way to make peace. Peace, not appeasement or total war. In order to be able to do that, we first need to turn back to Jesus and ask for help.

Bishop Whalon concluded with this prayer

O God, the Father of all, whose Son commanded us to love our enemies: Lead them and us from prejudice to truth: deliver them and us from hatred, cruelty, and revenge; and in your good time enable us all to stand reconciled before you, through Jesus Christ our Lord.
Amen.

God love you.  God bless you.  And may God hold us all in those Almighty hands of love.