Allow me to talk about the vision of the Jesus Movement on the practical  churchwide level and what that really begins to look like and how embracing that has obvious implications for budget and structure and engagement.

This is the result of work by the officers and canons who have been working together, and by the way, we meet together monthly to think on a broader strategic level, and it’s one way to unite or bring together every aspect of the DFMS (Domestic and Foreign Missionary Society).  We just started that and it really does seem to be an effective way to make sure that we’re all in touch with each other on that broader level. That decision was an outgrowth of the work that we did with the Human Synergistics folk that led to this diagram. The intent here was to really flesh out what does it mean to be a church that embodies the Way of Jesus of Nazareth in our common life together as a whole church. It’s really clear that the actual life of the church gets lived in our congregations, our lay and clergy people, it is lived as people of God as Verna Dozier used to say, “The real action happens when the dismissal get said, ‘Go into the world’”, that’s when the action happens. 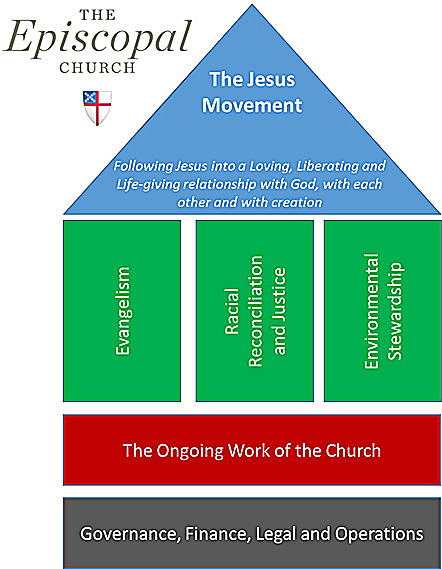 And so how do we on a churchwide level actually enable that to happen throughout the entire church?  And this is one way to begin to look at that.  Let me just walk you through.  We looked at the Jesus Movement, began to think “OK, now let’s put some more language on that so that it just doesn’t become a rhetorical frame, so that it begins to take on life.”  It took us a while to get there but then we finally realized that what we’re talking about is a community of people who are committed by their baptism, as baptized disciples of Jesus Christ, to live the way of Jesus.

And when you look at the light of Jesus of Nazareth, there are a lot of things that you would expect.  This brother was and is incredibly loving, and that love liberates folk, and liberation gives life to folk.  Liberated people can live the life that God has dreamed from the beginning.  Loving, liberating, life-giving.

It was in the parable this morning, the lawyer comes to Jesus, he says love God, love your neighbor and all that stuff.  And Jesus says to him do this and you will live. That this Jesus is loving, liberating, life-giving, and his way is loving, liberating and live-giving, you see that up at the top, the movement is about a community of people baptized and committed to living that and helping this world to reflect that.  It doesn’t even have to make everybody Episcopalian though that would be nice, it wouldn’t be bad, but that is not the point of it. The point of it is to transform the world so that it looks something as Bishop Stokes said last night something like the reign, the kingdom of God in our world.  Like the Lord’s Prayer, “Thy Kingdom come, Thy will be done, on earth as it is in heaven.”

And so that top piece of the chart was kind of fleshing out the Jesus Movement a little bit more, just in that simple statement, “Following Jesus into a loving, liberating, life-giving relationship with God and with each other,” is the summary of the law Jesus already taught us. We’re not coming up with anything new.  We are living the way of Jesus.  That is the way we are headed, we are people of the way, Jesus is our direction.

And then at our General Convention we were aware of this and we talked about this. General Convention identified three mission priorities and two were very clear and when the officers and canons met we realized when were together that there was a third. That’s where the third one came from, General Convention was clear about Evangelism and Reconciliation but we know Environmental Stewardship is critically important in this moment too, because all too often people needing liberation are the ones who experience firsthand the harmful impact of what happens when we don’t care for God’s creation.  So we focus on those three.

I was at a gathering with other Bishops and Archbishops when I was asked to explain the actions of our General Convention, with particular interest in our changing the marriage canon.  There were obviously questions and concerns, but I can tell you that when I said that this reflects who we are in Christ, that that’s how we are living into being followers of Jesus Christ and reflecting what St. Paul said in Galatians 3, “All who are baptized into Christ have put on Christ, there are no longer Jew or Greek, slave or free, male or female, all are one in Christ.” Our brothers and sisters listened, even where there might be disagreement.

Then I said, “Now, the next thing you need to know that our General Convention did, we worked on Evangelism.”  We are really talking about participating in re-evangelization of the West.  And re-evangelization in a way and evangelism that actually looks something like Jesus of Nazareth and not like cultural accretions around Jesus of Nazareth.  And that’s an important distinction to make.

And I have to tell you the room changed. One bishop actually asked, “The Episcopal Church is actually doing Evangelism?”  And I said, “My Brother, that’s what we’re about. I wouldn’t be a Presiding Bishop if we weren’t doing that.” That is what we are talking about. The room, the conversation changed and focused on Evangelism.

And then when we went to Racial Reconciliation. Others in the world know about the racial and other polarizations in American society. They knew about Charleston, they knew about our struggles here.

The gospel work of Racial Reconciliation and the work of Evangelism really did resonate.

And the third one, when I talked about Environmental Stewardship, at first they said, “What are you talking about?”  I said, “About the care of God’s creation.”  “What are you talking about?”  If we mess up the earth where we all have to live then none of us is going live!  And then they started talking about ways in which damage to the climate and the environment is impacting them directly.  My point is the three mission priorities, which is the three pillar-like things there actually resonate beyond our church because they have to do with our following the way of Jesus, helping to make this world and this global community something that really does resemble God’s dream and not our nightmare.

And so General Convention did that and that’s what those three represent. Then we kept looking at what is the work of the church because General Convention set those missional priorities: Evangelism, Racial Reconciliation and Environmental Stewardship.  That doesn’t mean that’s all we’re doing because there is an ongoing life of the church that makes work on those priorities possible.

That next foundational piece, the ongoing work of the church, there’s a lot of stuff that goes on in that area, that’s ongoing, and that’s part of the life and the mission of the church.  Some of that ongoing work is work within the Episcopal Church to support and nurture it and to encourage the work that actually happens in congregations and in the life of our people. I’ve said this before, we don’t need the church-wide community to do what dioceses do better, and we don’t need the church-wide community and the dioceses to do what congregations do better. There are roles for all to play. We don’t need to try to replicate on a churchwide level what a congregation or a diocese does. We need to do at the churchwide level what we can’t do at other levels and do that in what’s which bring everybody together throughout our church.

And then the foundation at the bottom.  Governance, finance, and legal.  That’s the stuff that keeps the machinery going. I used to say when I was a parish priest that I spent most of my time with doctors and morticians.  When I became a bishop I spent my time mostly with lawyers and Russ Randall and his friends, I mean his employers.  Governance, finance, legal, all of it, operations, that’s the stuff that undergirds, it helps this ministry work, it greases the wheels, it actually helps us get going again, and it helps us to plan for good strategic and efficient ways forward.

That’s the big broader picture of what might this Jesus Movement might look like on a churchwide level, both in terms of how we kind of organize, maybe even how we do our budget, but it’s a way of conceptualizing, the pillars, mission priorities, the ongoing work of the church within without, and legal, financial, operation that makes it all happen.

This is a way for our particular time.  Each new age and each new generation must discern how it will faithfully live out the Gospel of Jesus.  But this represents a way for this particular period of time, and nothing is final, nothing is settled except for the kingdom of God. We are a movement after all. And our church has a long and faithful history, I’ve seen it, of faithful witness to the Gospel of Jesus. And in our time it may be to awaken that in some new ways. I heard once that Billy Sunday the evangelist, at one point, this must have been turn of the century, the 19th or 20th century, he apparently said, “Heaven help the rest of Protestantism if the Episcopal Church ever wakes up.”  And I heard that saying but I didn’t really know the context or the history of it and I quoted it in New York at the Church Club dinner and Bishop Dietsche and one of the priests came up and they told me the backstory of that quote which I had wondered about -was it a compliment, was it a backhanded compliment, I wasn’t quite sure what he really meant by it.  And this priest who I believe is at St. George’s said the story behind that quote is that Billy Sunday had been invited to St. George’s Church in New York to actually do a revival there.  He had never visited an Episcopal church before, and he came and did his revival thing and he happened to walk in the pews and he saw a Book of Common Prayer and he started reading the Book of Common Prayer.  And as he read the Book of Common Prayer, he lifted his head and said, “Heaven help the rest of the Protestant world if the Episcopal Church ever wakes up.”

My Brothers and Sisters, we are awake.