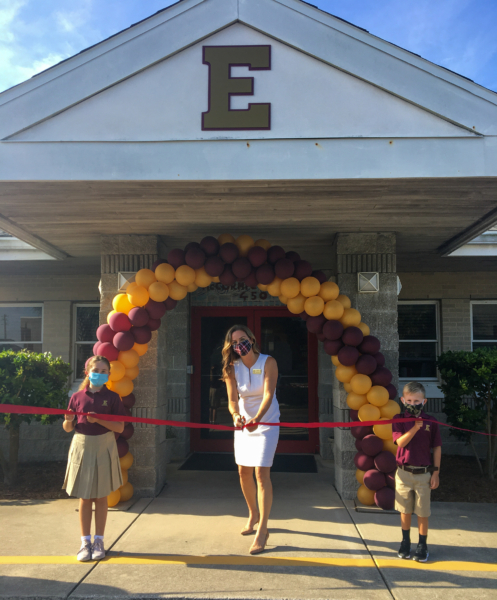 Jennifer Ketchum, Head of Lower School, Beaches Campus, cuts a ribbon to open school at the campus for the first time as Episcopal School of Jacksonville.

Episcopal School of Jacksonville opened classes for the 2020-2021 school year on its Munnerlyn, St. Mark’s Campus and its Beaches Campuses Thursday — the first time in the school’s history the school year has opened on three campuses.

“This year’s opening of school is unlike any other year we have faced, but our faculty, staff, families and students are still bringing with them the joy and excitement they always have in beginning a new year,” said The Rev. Adam Greene, Head of Episcopal School of Jacksonville. “We look forward to getting back to on-campus learning — especially during our first year as a three-campus school with our new elementary students. Despite the complications our current environment presents, the Episcopal community always grows stronger and closer when facing new challenges. Personally, I have never looked forward to opening day as much as I have this year!”

At the Beaches Campus, Jennifer Ketchum, Head of Lower School, Beaches Campus, opened the first day of school with a ribbon cutting underneath a newly-installed Episcopal sign. (Photo attached.)

St. Mark’s and Episcopal announced a merger in the fall of 2019; in 2018 Beaches Episcopal School in Jacksonville Beach also announced it would become part of Episcopal School of Jacksonville. Episcopal now serves students and families through every phase of their academic journey, from age one through 12th grade, on three campuses. The school is a community that prepares students for success in college and beyond by delivering a unique balance across Four Pillars — Academics, Athletics, Spiritual Life, and Fine Arts — diverse extracurricular programs, small class sizes, and exceptional faculty. An Episcopal graduate lives into his or her potential by becoming a well-rounded individual who seeks understanding, develops a sense of self, lives with honor and purpose, and pursues a life of faith.