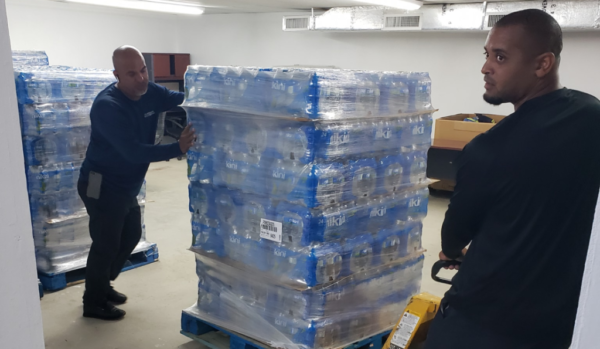 Episcopal Relief & Development is supporting Episcopal dioceses located in the path of Hurricane Dorian as they respond to the needs of impacted communities.

As of Tuesday morning, Sept. 3, Hurricane Dorian, now a Category 3 storm, has moved through the Caribbean, lingering over the Bahamas, and has begun to move north toward the eastern coast of the United States. The storm hovered over the Bahamas, moving only 30 miles in 30 hours, causing extensive damage throughout the islands, particularly the Abaco Islands and Grand Bahama. Much of the southeastern coast of the United States has evacuated in preparation for Hurricane Dorian striking later this week.

Episcopal Relief & Development staff is conducting daily coordination calls with dioceses in the path of the storm. In addition, the organization is working through the Anglican Alliance to support the Anglican Diocese of the Bahamas & the Turks and Caicos as they wait out the storm and begin assessing the damage on Wednesday once the storm clears. The organization’s Partners in Response and Resilience stand ready to respond in the coming weeks as the full extent of the slow-moving storm becomes clear.

Dioceses along the eastern coast of the United States from the southernmost tip of Florida up through South Carolina are already preparing and anticipating the needs of affected communities. Episcopal Relief & Development plans to support the Episcopal Diocese of Central Florida in their outreach to homeless and other vulnerable communities in Orlando, Titusville, Oveido, Ocala and surrounding areas with shelter, hurricane preparedness kits, water and nonperishable food ahead of the storm. Episcopal congregations have also opened their doors to help serve as a place of shelter for evacuees.

“I am encouraged to see how dioceses in the U.S. and Caribbean have prepared and mobilized ahead of Hurricane Dorian,” said Katie Mears, Senior Director for Episcopal Relief & Development’s U.S. Disaster Program. “While the impact of the storm is not yet known, they are ready to provide support however needed.”

For over 75 years, Episcopal Relief & Development has been working together with supporters and partners for lasting change around the world. Each year the organization facilitates healthier, more fulfilling lives for more than 3 million people struggling with hunger, poverty, disaster and disease. Inspired by Jesus’ words in Matthew 25, Episcopal Relief & Development leverages the expertise and resources of Anglican and other partners to deliver measurable and sustainable change in three signature program areas: Women, Children and Climate.