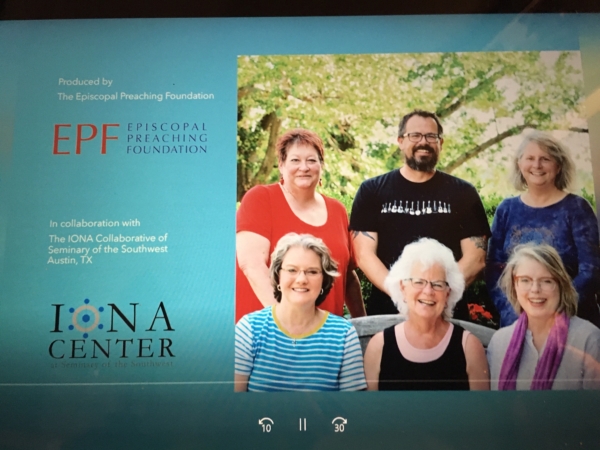 The Episcopal Preaching Foundation and the Iona Center at Seminary of the Southwest announced today that they have partnered to produce a video-based homiletics curriculum for the Iona Collaborative, which provides a graduate-level, non-degree, three-year training program with online access for ordinands in local diocesan schools as well as to help form lay leaders and disciples.

The 41 teaching videos, a year in the making, feature six diverse presenters “who are representative not just of where our church has been in the past but where it is going in the future,” EPF Executive Director Peter Wild said.

Wild said the videos form a “very rich three-year curriculum” for budding and growing preachers. Each year of the program features 10 monthly modules, each with learner and facilitator guides.

All of the material for the first year of the curriculum is complete, Wild said, as are the videos of the second and third years. The guides for the second two years will be available later this year.

“We have a little evolution space here” in which participating dioceses can give feedback that can help refine the guides, said Wild.

Dr. Virginia Wiles, Emeritus Professor of New Testament, New Brunswick Theological Seminary, said she developed the guides to stimulate a combination of action and learning, as opposed to three years of learning followed by action at a later date. The method is built on mutual respect between teachers and learners, and freedom to be authentic with accountability, Wiles said. The curriculum also calls for private journaling to help students reflect on their experiences in the training.

“I look forward to using it,” the Rev. Lori Modesitt, Dean of Education for the Diocese of Wyoming said during a July 30 Zoom presentation to the diocesan partners.

The Rev. John Lewis, DPhil, director of the Iona Center and lecturer in New Testament and spirituality at Seminary of the Southwest, said the curriculum modules could also be used by ordained clergy as continuing education. “There are ways to imagine using this beyond the confines of a three-year program,” he said.

The Episcopal Preaching Foundation Founder and Chairman Gary Shilling commented: “The EPF is proud to support the Iona Collaborative’s work of forming future clergy in this robust alternative track to a traditional seminary education. There can never be enough strong preachers in our Church and I’m delighted that the Foundation has assembled the resources to make this significant addition to Iona’s preaching program.”

The Episcopal Preaching Foundation encourages excellent preaching in the Episcopal Church. The EPF strongly believes in the foundational role of preaching to energize and build church membership and attendance in today’s challenging environment, as recently documented by Gallup and the Pew Research Center.

Founded in 1987, the foundation began its programs in earnest in 1989. Since then, more than 1,800 seminarians have passed through its Preaching Excellence Program, including several bishops and one presiding bishop. More recently, the EPF has expanded programming to embrace practicing parish clergy through the annual conference (“PEP-II”) and ad hoc diocesan conferences.

Since 1952, Seminary of the Southwest has delivered residential, on-campus training and formation for ordained ministry, as well as, more recently, in-person theological and pastoral teaching in local diocesan schools forming students for ordination.

The seminary is now using technology to meet rapidly changing contexts for leadership and ministry training. In 2011, Southwest joined an innovative educational experiment pioneered by the Episcopal Diocese of Texas and six other Episcopal dioceses. A curriculum was created in electronic formats using substantial contributions from the seminary faculty. It was then licensed to local diocesan schools training students for ordained ministry.

The Iona Initiative project launched in 2012 with under 75 video teaching modules. Over the past eight years, seminary leaders and faculty have created many additional online teaching resources for the curriculum, which now consists of at least 265 online modules with more than 450 hours of instruction.

In early 2017 the Iona Center assumed leadership of the Iona Initiative and immediately expanded the scope of theological resources. The name was changed to Iona Collaborative to emphasize the consultative nature of the relationship between seminary and diocesan partners. Since then, the Iona Collaborative has grown from 12 to 29 dioceses.

After completing the three-year course of study, students receive a Certificate in Theological Studies from the seminary and are then ordained by their local diocese to serve primarily in bi-vocational congregational ministry, usually on a part-time and sometimes non-stipendiary basis. In some dioceses, students preparing for diaconal ordination complete a two-year course using the curriculum and they are awarded a Certificate in Diaconal Studies.

In 2019 the Iona Center launched a second curriculum for use in congregations to help form lay leaders and disciples. With 45 online teaching modules to start, the collection has increased to 65 modules.

Another extensive addition to the curriculum will soon launch, focused on training congregations in asset-based community development created by the Called to Transformation project of the Episcopal Church and Episcopal Relief & Development.

The Iona Center supports four distinct but related populations – primarily through the Iona Collaborative network – with its online teaching materials: