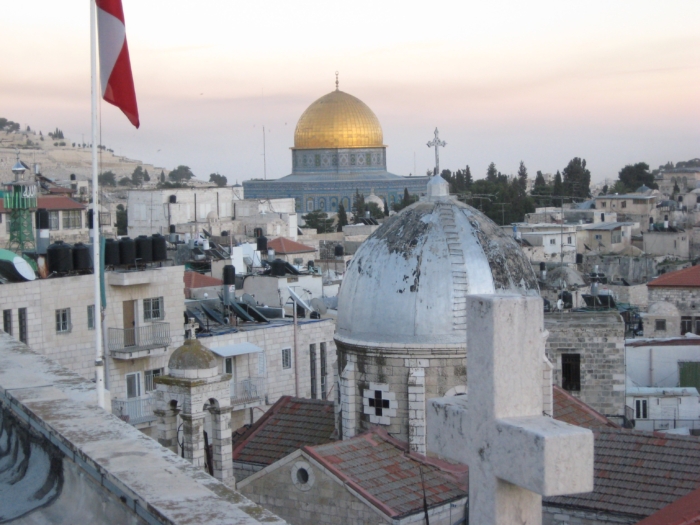 The Holy City of Jerusalem

The Episcopal Church’s House of Bishops has issued from its March 2022 retreat a pastoral letter “supporting Jerusalem’s prophetic identity as the Holy City of Peace” in response to General Convention 2018 resolution B003. The letter is a profound disappointment in that it speaks only in part to the letter of B003 while utterly ignoring its spirit and intent.  In a moment of opportunity to offer prophetic witness to the worsening situation in Palestine, Israel, and specifically in Jerusalem, the pastoral letter instead avoids addressing the root cause of discord in Jerusalem that it repeatedly laments: the systematic, relentless, and violent ethnic cleansing of Palestinians from the Holy City.

The letter is a regrettably tepid response to the decades of a tragic constellation of injustices and violence against the Palestinian citizens and residents of Jerusalem, including the Palestinian Christians. That the letter avoids naming the injustices, which are the true obstacles to peace, is perplexing and disturbing. Vague implications of lack of peace, unspecified references to “those who are oppressed”, those “who misuse their power”, and use of violence are not helpful and smack of appeasement. The vagueness suggests that the causes are mysterious or hidden. They are not. Even a casual walk in Jerusalem reveals them in clear light to all who will see:

Not mentioning these observable facts nor even Israel’s military occupation itself makes the bishops, and by extension The Episcopal Church, appear to be unaware or untroubled about the devastation impacting so many lives in the Holy Land.

Throughout the pastoral letter, the tone and implications of equally shared responsibility between Israel and Palestinians, and the suggestion that interfaith and ecumenical work are the solution are uninformed and stand in stark contrast to two bolder statements from the bishops at their March retreat. In a statement about the conflict between Russia and Ukraine, the bishops specifically denounced Russian attacks on civilians, describing these actions as a flagrant breach of international norms, and identified “a direct link between our baptismal covenant to respect the dignity of all people in Christ and the demand to respect the will of nations to determine their own destiny.” No such standards were applied to Israel. In another very important and welcome pastoral statement/resolution, the bishops were “urged…to consider the importance of naming specific instances of bigotry” against transgender and non-binary persons. Again, no such demand or standard was applied to the bigotry of the dozens of discriminatory Israeli laws. Bishops of The Episcopal Church have evidently failed to realize or accept the importance of supporting international legal frameworks for human rights everywhere in the world.

Two other factors contribute to the disconsonant tone and message of this letter. First, astonishingly, the letter fails to reference or invoke the 30 years of Episcopal Church policy wherein the multiple examples of Palestinian human rights violations, atrocities of the occupation, and responsibilities of the government of Israel are clearly stated alongside consistent support for Israel’s right to exist and firm condemnation of violence. Ignoring this full range of Church policy is a gross abdication of the House of Bishops duty of Church governance.

Second, despite the stated deference to Palestinian Christians, the letter failed to mention or react to either the statement from Diocese of Jerusalem Archbishop Hosam Naoum or the Palestinian Christian Kairos movement’s “Cry for Hope” document. Both articulate the specific violence, crimes, and atrocities stemming from the ongoing occupation and settler movement. Both have asked for support from the American government and churches, but none is forthcoming from this letter.

Finally, the benign “encouragement” for Palestinian Christians to “persevere” is an affront, considering the billions of dollars of U.S. military aid and blank-check diplomatic protection given over decades to the state of Israel in the names of American members of the Church. We American Christians carry a special burden.

Resolution B003 was passed four years ago in 2018, abundant time to investigate events in Jerusalem, study their consequences, and ponder their implications, so it is difficult to imagine a process lingering for those four years that resulted in such innocuous and ineffectual platitudes. We the people of the Church look to the ordained for leadership in staying true to our baptismal covenant and boldness in following Jesus. In prayer, certainly, but also in prophetic witness and actions beyond dialogue; for example, political engagement, participation in economic pressure campaigns, and unequivocal outward expressions of solidarity with the oppressed. We are reminded of the words of Dr. Martin Luther King, Jr. who wrote, “True peace is not merely the absence of tension; it is the presence of justice.”  The failure in the letter to name the many hurts and to call merely for “ecumenical and interfaith discernment and collaboration” is a sad and shameful failure of pastoral obligation.

As General Convention 2022 approaches, we look forward to calling attention to injustices, no matter how disquieting or inconvenient, and to joining deputies, bishops, and all people of the Church in pursuing the hard work of striving for justice and peace among all people.