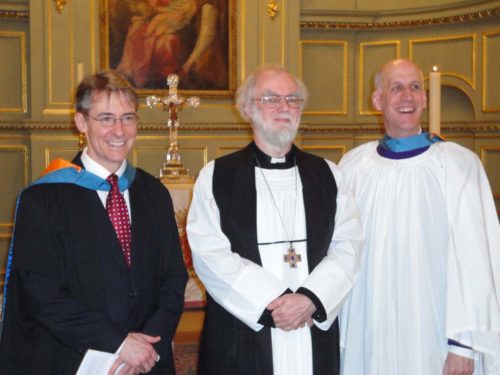 [Episcopal News Service] Two Episcopal organists became the first Americans to receive the highest award bestowed by the Fellowship of the Guild of Church Musicians during an Evensong Jan. 16 at the Queen’s Chapel, Marlborough Road, at St. James Palace in London.

Darryl Roland, music director at St. Peter’s Episcopal Church in Morristown, New Jersey, and Jeffrey Smith, who now lives in England and has served on the organ and church music faculty of the Indiana University Jacobs School of Music since 2009, received the award of Fellow of the Guild of Church Musicians, honoris causa, in a presentation by Archbishop of Canterbury Rowan Williams.

Roland was honored “for his outstanding work as director of the cathedral choir school at St. John’s Cathedral, Delaware, which I observed first hand when I lived in the U.S. It was the only program of its kind for miles around and deeply inspirational,” Giles Brightwell, member of the Council of the Guild of Church Musicians, said via e-mail. Brightwell was director of music at Immanuel Episcopal Church on the Green in New Castle, Delaware, before returning to the United Kingdom in 2009.

Roland began his new post in Morristown in August.

Smith was honored “for his work in building up the men and boys program at St. Paul’s Parish on K Street in Washington, D.C., and for his work at Grace Cathedral [in San Francisco] and Indiana University,” Brightwell said.

Before joining the Indiana faculty, Smith was canon director of music at Grace Cathedral, where he conducted its Choir of Men and Boys, conducted tours and recordings and oversaw a weekly concert series. From 1992 to 2004, he was music director at St. Paul’s Parish, K Street.

Founded in 1888, the guild is an interdenominational organization based in Great Britain that is similar to the American Guild of Organists. According to its website, the guild “exists to encourage all musicians within the church, whether amateur or professional, to foster the highest attainable standards of music in the worship of Almighty God.”