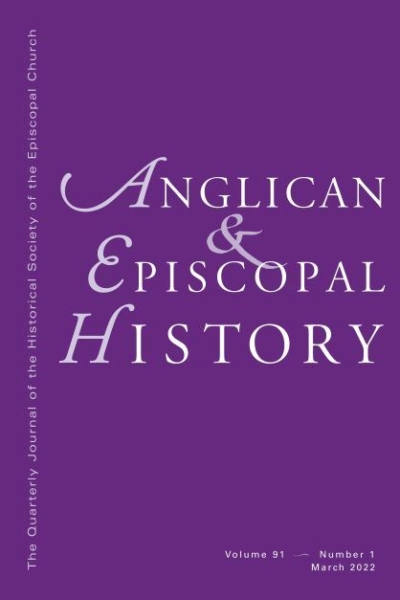 Church historians investigate poetry, tables and altars, ritualism, and the development of Spanish-speaking ministries in Central America in the March issue of Anglican and Episcopal History.

In the lead study “Altar of Print, Altars of Stone”, Jarrell D. Wright, a literature instructor at the University of Pittsburgh, examines “The Altar” and other poems in English poet George Herbert’s (1593-1633) collection The Temple.

Wright views Herbert’s legacy as the exemplar English parson as prompting endless debates as to where his writings belong on the continuum of English reformed belief and praxis. Wright offers a new view as to Herbert’s place on that continuum.

The Rev. Warren C. Platt then explores the development of ritualism in “St. Alban’s Church in New York City: the First Avowedly Ritualistic Church in the United States.”

Platt’s work examines the transformation of Church of Intercessor into St. Alban’s in 1865 as it became a beacon of liturgical ritualism in the Diocese of New York including use of liturgical vestments, elaborate processions, and celebrations of High Mass.

In the final study of the March issue, the Rev. John Rawlinson investigates the development of Spanish-language ministries by Episcopalians in Central America.

Rawlinson’s “Literature for the Latino Church: An Episcopal Translation Project” examines the success of a center established in San Jose, Costa Rica, for translation and publication of books and tracts in Spanish established by the 1963 General Convention.

Rawlinson, a bilingual priest who currently serves as archivist for the Church Divinity School of the Pacific, describes long-time missionary Carman St. John Wolff (1923-2000) as a driving force for the project. He identifies confusing governance models, financial challenges, and limited staffing as ongoing challenges for the project. Rawlinson concludes, “The national staff of the Episcopal Church began the Centro with good intentions, but without realistic expectations.”

AEH is a peer-reviewed journal published quarterly by the Historical Society of the Episcopal Church. Active members are able to access each issue digitally. Join here.

About Anglican and Episcopal History
Anglican and Episcopal History (ISSN 0896-8039), formerly The Historical Magazine of the Protestant Episcopal Church, seeks to raise the level of discussion, provide a forum for exchange of ideas, and review books of real worth and of interest to educated Anglicans. It is published quarterly in March, June, September, and December. Full text articles are available through JSTOR.org and for members of the Historical Society of the Episcopal Church at hsec.us/AEH.