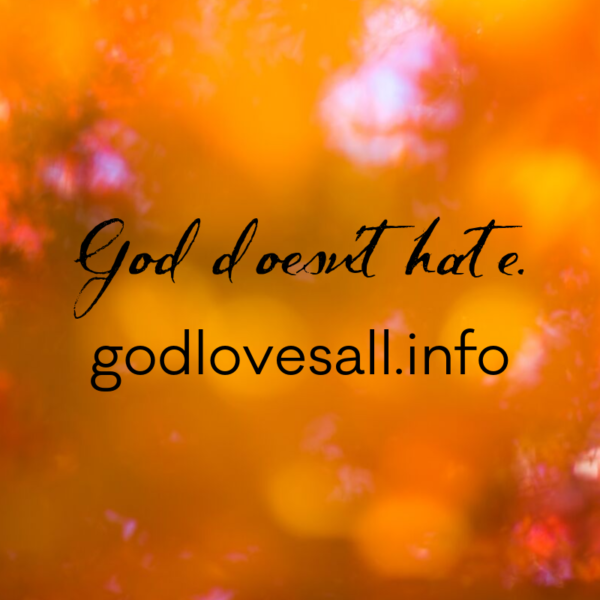 Godlovesall.info is a microsite devoted to the evangelism initiative.

On October 1, 2019, The Episcopal Diocese of Fort Worth launched an evangelism initiative aimed at the unchurched, the dechurched, those wounded by the Church, those who sometimes are told that God hates them. In a statement that is very countercultural these days, we offer a simple, true message to all people: God doesn’t hate. God loves all. God loves you. Yes, you.

We have created a microsite devoted to this message, explaining the theology, scripture, and reason behind the statements.

We felt called to do this because research by Gallup and the Barna Institute has shown that in recent years the word too many Americans, particularly young Americans, associate with “Christian” is “hate,” while others associate it with hypocrisy, anti-homosexuality, sexism, racism, and judgmentalism. We felt moved to do this by the increasing number of hate crimes being committed against immigrants, transgender women, and other vulnerable populations. We felt impelled to do so because Texas now leads the nation in the killing of transgender people.

Our goal is to help people find a closer connection to God, hopefully in and through The Episcopal Church. But the main thing is telling them that God doesn’t hate, God loves all. Telling them of God’s love for them. Yes, all of them, in all their authentic being.

For this campaign we created a microsite, which is a website narrowly focused on one theme, in this case, the love of God for all humanity. The URL is godlovesall.info. The topics covered include LGBTQ, Civil Discourse, Ancient/Modern, Racial Justice, Women, Creation Care, and Re/Marriage. All material related to these topics is original or sourced from The Episcopal Church. Everything related to the campaign – ads, banners, brochures, business cards – points to the microsite.

The site includes videos of local people telling of their experience in The Episcopal Church – a gay couple, a family with adopted children, a woman priest. Soon to be added are a divorced and remarried couple and a couple who left a mega Bible church because they were tired of hearing only of a harshly judgmental God.

This initiative began when a group of our clergy asked for help in marketing the message of a loving, liberating, life-giving God. In this area of the country dominated by conservative evangelical churches, it can be easy to overlook the work of The Episcopal Church.

Bishop Scott Mayer gave his blessing to an evangelism campaign, and made it clear the goal is to bring people closer to God, not to seats in our pews.

Because we are a small diocese with a small staff and a small budget, this campaign was largely an in-house effort, led by Director of Communication Katie Sherrod. This campaign is based on authenticity, education, and courage. A committee of clergy and lay people of varying ages, backgrounds, and experiences of and in the church was formed and soon developed our message, our target audience, and our goal:

● Message: A countercultural message of unconditional love – God doesn’t hate. God loves all. God loves you. Yes, you.
● Goal: Helping people find a closer connection to God, hopefully in and through The Episcopal Church. But the main thing is telling people of God’s love for them. Yes, all of them.
● Target audience: The unchurched, the dechurched, people who have been wounded by the Church, people who have been told God hates them, people hungry for a closer connection to God.
The initial launch is with inexpensive ads and free content on social media; business cards, and street banners, all spreading the message that “God doesn’t hate.” “God loves you. Yes, you.” All will point to microsite.

Over the course of the next year, we plan to expand our message to billboards, movie screen ads, and light pole banners in downtown Fort Worth.

Simultaneously with developing the campaign, we have been working with our congregations to intentionally develop a truly welcoming culture. Many congregations describe themselves as welcoming while never having actually thought through what that entails in practice week after week. We have developed a discernment process for congregations as they work through what God is calling them to do, here, in this part of North Central Texas. Training in the process is ongoing.

We believe this message of God’s love is needed now more than ever. We are calling this an initiative, not a campaign, because we want it to become an ongoing part of the DNA of this diocese, not a one-time push with a beginning and an end.

We invite you to check it out at godlovesall.org.