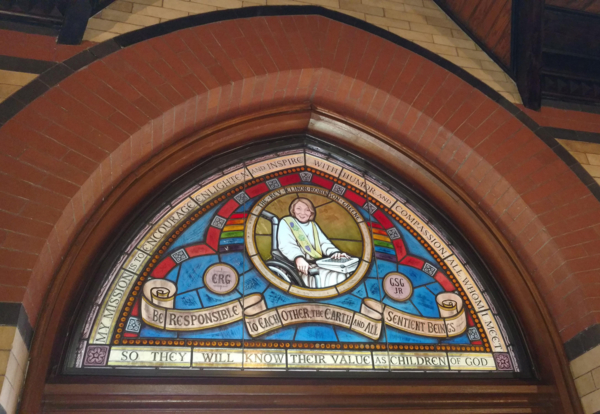 The Rev. Elinor Robinson Greene, II, deacon of the Episcopal Church, is now memorialized in stained glass at the Church of St. Martin-in-the-Fields in Philadelphia, Pennsylvania. Greene died two years ago on August 27, 2016, but her memory is alive and well.

Greene, known as Nellie, was born and raised in Chestnut Hill. She was baptized at St. Martin’s and grew up there, participating in the church school and the choir. A car accident on her way to college left her severely disabled, yet Nellie, with significant help from her mother, went on to finish college with a degree in poetry, a Master’s Degree, and diaconal training in The Episcopal Church.

The window depicts Greene smiling, dressed in her deacon’s vestments, while seated in her wheelchair with her voice box on her lap. Below the circles containing her parent’s initials, the scroll reads, “Be responsible to each other, the earth, and all sentient beings.”

Nellie received her call to ministry during college. It was the 1970s, and approval for the ordination of women did not come until 1976. Persons with disabilities were still feared and shunned, and imaginations were limited as to how and where a woman in a wheelchair might serve. As Nellie wrote in one of her later sermons titled “Faith”:
“My call to ordination took a great deal of faith to live into, and when I first received it, the Episcopal Church wasn’t ordaining women. The whole process took 15 years to accomplish and I was sorely tempted to quit at many times during the journey. If I had not been convinced my call was legitimate, I never would have made it. Mother was embarrassed by it and urged me to stop many times. This was hard. She likened me to the blind woman who had to give up her dream of becoming a nurse. But once she believed me, she was a rock of support.”

Despite initial hesitation from her mother, Nellie eventually attended and graduated from seminary at Yale Divinity School with a Masters in Religious Art in 1982. Some time after she returned to Philadelphia, members of St. Martin’s helped Nellie realize her call to ordained ministry and, after a few more years at Philadelphia School for the Diaconate Nellie was ordained a deacon of the Episcopal Church in 1993.

At the dedication of the window on June 10, the Rev. Anne Thatcher acknowledged that while Nellie was an Episcopal deacon, St. Martin’s missed out on her ministry. When Nellie needed field placement for her diaconal training, the Episcopal Diocese of Pennsylvania could find no placement for her.

The Rev. Jarrett Kerbel, in his sermon that morning, said that the window of Nellie is there to honor her memory, including the ways in which we failed Nellie in her life.

“We’re called to hear that uncomfortable voice and say yes, we see God’s liberating work happening and we will join it even if there’s a cost. Even if there’s pain. Nellie spoke that word to this very church,” preached Kerbel. “She was ordained here in this space, yet no ministry was found for her here. No ministry was found for her in any Episcopal church in the diocese. Something we need to repent from and learn from.” Nellie’s window is a reminder to send us forth repentant and redeemed to walk into the changed life of service that Nellie walked.

Into this ministry gap stepped the Rev. Hal Taussig, then Pastor of what is today Chestnut Hill United Church. He taught Nellie during her time at the Philadelphia School for the Diaconate and immediately welcomed her into his church. The Reverend Linda Noonan, the current senior pastor at Chestnut Hill United, also worked with Nellie for many years. In her prepared remarks for the dedication, Noonan said that “Nellie’s 23-year ministry at Chestnut Hill United Church as deacon could be summed up as a powerful ministry of preaching, prayer, and presence. …Her light and love continue to shine on us.”

Situated above the Willow Grove entrance to the church sanctuary, the window is at the same entrance as the ramp that St. Martin’s installed four years ago. Kerbel remembers, “she also agitated us to build that ramp out there,” a project that took 30 plus years to happen. “Nellie was one of the first people up that ramp.”

The text surrounding the inside of the window frame, along the arch and the bottom around the whole of the image, is Nellie’s personal mission statement: My mission is to encourage, enlighten, and inspire, with humor and compassion, all whom I meet so they will know their value as children of God. Kerbel preached, “I encourage us all to write a mission statement for ourselves like [Nellie’s]. As a people we have a mission. We have a mission to represent Christ in the world; to represent Christ and his compassion and his love and his care. We have a mission to represent Christ in his redeeming, reconciling, renewing justice for all people. And every Sunday we’ll be reminded of that mission when we pass through that door and the ministry of Nellie will continue. For generations.”

Window design, rendering, production, and installation were done by Willet Hauser Architectural Glass and was funded by gifts from the extended Greene family. In addition to the dedicated stained glass window, St. Martin’s supported the writing of a short biography of Nellie’s life and ministry. The Rev. Elinor Robinson Greene, II: Through the Narrow Door, by Laura Palmer was presented to family members and friends. A PDF of the biography is available from St. Martin’s.

Biography, photos, sermon recording, and additional information available upon request. Please contact Natalee Hill, Associate for Communications & Administration at nhill@stmartinec.org or by phone at 215.247.7466 x106 or 610.360.3415.