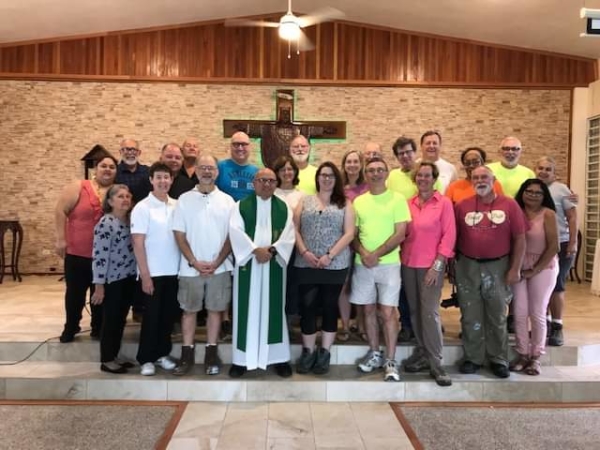 Mission trip group from Lancaster Pennsylvania with hosts from the Diocese of Puerto Rico.

Since Hurricane Maria devastated Puerto Rico in 2017, the Episcopal churches in Lancaster County, Pennsylvania (Diocese of Central Pennsylvania) have supported 3 mission trips to Puerto Rico to help improve the lives of people in Arecibo, Puerto Rico.

The 2020 group of 15 parishioners from 4 Episcopal churches including Saint James, St John’s, St Thomas in Lancaster and St Luke’s in Mount Joy worked in conjunction with the Iglesia Episcopal San Pablo in Arecibo, Puerto Rico which is in the Episcopal Diocese of Puerto Rico. The missioners had several fundraisers during the year to help pay expenses for the trip. The recent scheduled trip was in doubt because of the earthquakes on the island.

The earthquakes have been in the southern part of the Puerto Rico and Arecibo, where the missioners were going, is on the northern side of the island. With the need for resources for earthquake victims as well as continued help needed for Hurricane Maria victims, Holy Trinity Lutheran Church in Lancaster saw the need and presented the missioners with a major gift of over $6,000 to purchase supplies. The funds were used to repair the roofs on 3 homes which had been damaged and leaking since Maria. One home was owned by a 93 year old veteran of the US military. The need continues to be great and plans are in motion for another trip in 2021. The homes to be repaired are selected by San Pablo parish for repair. The priest at San Pablo’s in Arecibo, Fr. Jose Pio Gonzalez, plans to get more focused community involvement for the next trip. It has been an empowering experience for the entire community as neighbors help neighbors.