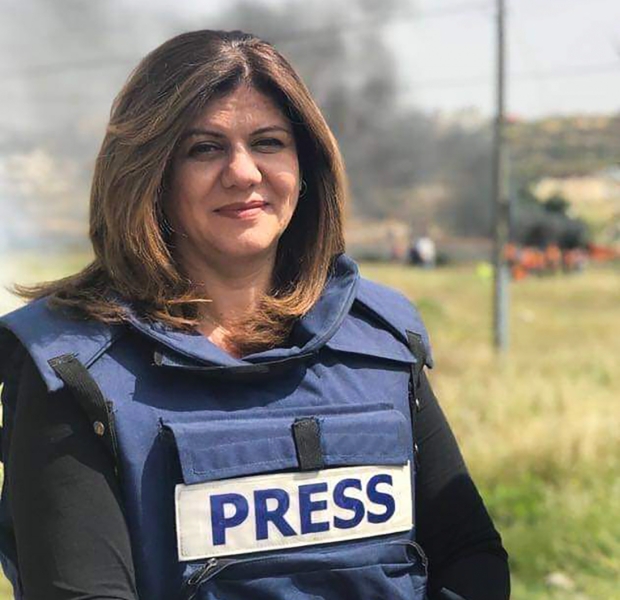 Veteran Al Jazeera journalist Shireen Abu Akleh was shot and killed during an Israeli raid in the West Bank.

Members of the Episcopal Peace Fellowship Palestine Israel Network, joined by our supporters and followers, are horrified by the murder of Al Jazeera journalist Shireen Abu Akleh by Israel Defense Forces (IDF) on May 11, 2022. Ms. Abu Akleh was killed by a bullet to her head while covering an IDF raid in Jenin refugee camp in the occupied West Bank. She was wearing a helmet and vest marked “PRESS” at the moment of her murder.

Another journalist standing next to her, Ali al-Samoudi, was shot in the back and is recovering in the hospital. A third journalist at the scene, Shatta Hanarsha, said “A group of journalists were in Jenin refugee camp. We were in an open space so that the Israeli occupation forces could see us clearly. The four of us were wearing our press gears. There were no clashes or gunmen in the area. In front of us were Israeli snipers and behind us was an Israeli wall. First, Ali Al-Samoudi was shot and Shireen started screaming. Then, Shireen was injured, and they intentionally shot at us, and their intention was to kill us as they continued shooting even after Shireen was injured.”

IDF spokespersons initially issued statements blaming the killing on armed Palestinians but have since reversed their statement and said it is “unclear” who killed Ms. Abu Akleh, expressing “regret”. Within hours, IDF forces arrived at her home in Beit Hanina near Jerusalem to disperse people who had gathered there to mourn and support her family. This appalling behavior was repeated at her funeral when her pallbearers were beaten by Israeli police as they carried her body to church for her funeral.

Outrageous as this murder is, it is tragically not an isolated event in Palestine. In April 2022, the International Federation of Journalists filed a formal complaint with the International Criminal Court alleging war crimes against journalists by Israel’s security forces. The complaint alleges a pattern of targeting journalists and their facilities over a period of years.

Shireen Abu Akleh, a Palestinian Christian and an American citizen, began her career with Al Jazeera in 1997. Primarily from her base in Jerusalem, she “covered Israel’s violations of international law and relentless aggression against Palestinians”, reporting through the second Intifada and covering the several wars against Gaza. EPF PIN grieves her death, mourns her loss to journalistic integrity, and is outraged by the violent and inhumane manner of her death.

And while joining our brothers and sisters in Palestine in this grief, we are especially mindful that her murder now joins those of countless others who suffer and die at the hands of Israel’s brutal occupation. On the same day, though overshadowed by the killing of this respected journalist, Defense for Children International-Palestine reported the death of 16 year old Thaer Maslat in the town of Al Bireh.  He is the 10th child slain by the Israeli military in the West Bank in 2022.

We are shamed by the United States government’s role and responsibility in these tragedies. We join Rep. Rashida Tlaib who said “An American journalist clearly marked with press credentials was murdered. Doing and saying nothing just enables more killings. Whether you’re Palestinian, American, or not, being killed with U.S. funding must stop.”

As General Convention 2022 approaches, members of The Episcopal Church will have opportunities through resolutions to demand justice, legality, and morality in Palestine. We urge deputies and bishops to prayerfully reflect on Shireen Abu Akleh’s life, her vocation of truth-telling, and her needless, horrible death as they consider their Church’s response to this tragedy.