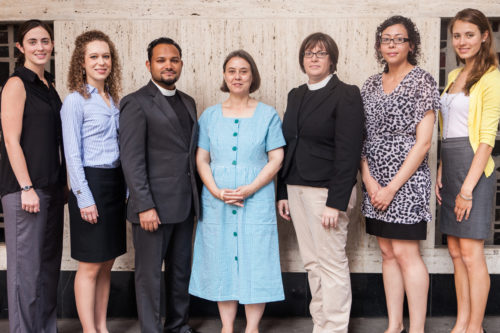 The positions reflect the priorities of Episcopal Church General Convention 2012 and focus on the Five Marks of Mission.

Lisa Bellamy has been named Development Research Analyst for the Episcopal Church Development Office.  As such, she will assist in the development of strategies for engaging and cultivating major gifts prospects and will be proactive in expanding the pool of high potential prospects and referring them to the Development staff.  Most recently she was the director of research at Yeshiva University since May 2005. Her previous work included an investigative analyst and litigation support specialist. A graduate of Princeton University, she is a faculty member at The Writers Studio in New York City and is a published poet and short fiction writer, as well as an award recipient.  Her office is based in New York City. She can be reached at lbellamy@episcopalchurch.org

Allison Duvall has been named Co-Sponsorship and Church Relations Program Manager for Episcopal Migration Ministries (EMM).  As a member of the DFMS staff, Duvall is responsible for being the liaison with parishes and dioceses where EMM resettlement sites are located, expand church and community support for refugees resettled, develop and implement marketing plans for Church co-sponsorship and other engagement programs and creates metrics to monitor the success of these initiatives to ensure they are on track to meet strategic objectives. Duvall previously served as the Executive Director of the Reading Camp in the Episcopal Diocese of Lexington and has served as a deputy to the 76thand 77th General Conventions. Among other Episcopal Church posts, she is a board member of Episcopal Appalachian Ministries. She holds a Bachelor of Religion from Transylvania University and studied at the School for International Training in Rabat, Morocco. She is based at her office in Kentucky. She can be reached at aduvall@episcopalchurch.org.

Elisa Elshamy has been named Web Development Lead for the Office of Communication. In this role, she is responsible for much of the day-to-day attention to www.episcopalchurch.org, library.episcopalchurch.org, and the Drupal web platform.  Elisa has served as web application developer with The Trace Foundation and Goldman Sachs. She is based at the Church Center in New York City. She can be reached at eelshamy@episcopalchurch.org.

Jayce Hafner has been named Domestic Policy Analyst. As a member of the DFMS staff, Hafner  represents the domestic public policy positions adopted by the Episcopal Church’s General Convention and Executive Council, and the ministry of the Presiding Bishop, to policy makers in Washington, including the White House, the Congress, Episcopal institutions and networks, the ecumenical community, and public interest organizations so that the Church has a direct presence and ability to advocate its positions to those who make or are concerned about government policy.  Hafner previously served as the DFMS office manager/staff assistant in the Office of Government Relations and as Episcopal Church representative to the Haiti Advocacy Working Group. A graduate of Hendrix College, she spent nine months as a Fulbright Fellow in St. Augustine, Trinidad and Tobago addressing domestic violence, trafficking and development issues. She is based at the Washington DC office.  She can be reached at jhafner@episcopalchurch.org.

Elizabeth Lowell has been named Development Director. In this role, she is focusing on cultivating major prospects with a concentration on the Episcopal Church Haiti and the Archives Project. As a partner in Raybin Associates, Inc., she worked with a variety of non-profit organizations in New York, New England and nationally, focusing largely on libraries, educational institutions and church-related organizations, as well as many Episcopal organizations and churches. She is based at the Church Center in New York City. She can be reached at elowell@episcopalchurch.org.

The Rev. Ranjit Mathews has been named Network Officer for Mission Personnel and Africa for the Episcopal Church. In this role, Mathews will support the Young Adult Service Corps and other missionaries across the region and with a particular focus on opportunities for mission partnerships across Africa.  He will be networking with parishes, dioceses and organizations in the Church that maintain relationships with Anglican dioceses, parishes and organizations.  Most recently he was associate rector at St. Luke’s in Long Beach, CA (Diocese of Los Angeles). A published author, among his previous posts were: a lecturer and chaplain at St John’s University of Tanzania; pastoral positions in the Diocese of Massachusetts; a consulting researcher for the Anglican Observer at the United Nations; and as an intern with the Anglican Church Province of Southern Africa in Cape Town, South Africa.  His office will be based in Los Angeles.  He can be reached at rmathews@episcopalchurch.org.

The Rev. Heather Melton has been named Coordinator for the United Thank Offering (UTO) of the Episcopal Church. As UTO coordinator and DFMS staff member, Melton administers the operations in the UTO office, located at the Church Center in New York City; coordinates the DFMS with the UTO board; participates and synchronizes the review of applications and the granting of UTO grants; maintains the UTO website and the Ingathering schedule.  Melton was rector of Christ Church, Garden City, NY (Diocese of Long Island), since May 2011. Previously she held pastoral positions in the Dioceses of Colorado and California and served as the chair of the Episcopal Church Standing Commission on World Mission, secretary of the Episcopal Church Liberian Covenant Committee, and a member of the planning committee for Everyone Everywhere 2008.  Her office is based in Long Island, New York. She can be reached at hmelton@episcopalchurch.org.

Kaitlyn Mullen has been named Program Associate – Processing for Episcopal Migration Ministries (EMM).  In this position, Mullen will lead the effort to deliver refugee travel and processing information received from the International Organization for Migration (IOM) and Refugee processing Center (RPC) to EMM’s network of affiliates in order to develop effective plans for refugee arrivals. She will also serve as a point contact for EMM with the International Organization for Migration to secure accurate and timely information on refugee case movements from the overseas locations to the United States. Most recently Mullen was the Refugee Youth Worker for Catholic Charities and volunteered with FrancisCorps in Syracuse, NY. She also worked at Mercy Learning Center where her duties included assisting in ESL education for low-income women. Her office is based at the Church Center in New York City. She can be reached atkmullen@episcopalchurch.org.

Information on all the positions and application instructions  is available here.

For more information contact a member of the Episcopal Church Human Resources Team at HRM@episcopalchurch.org.