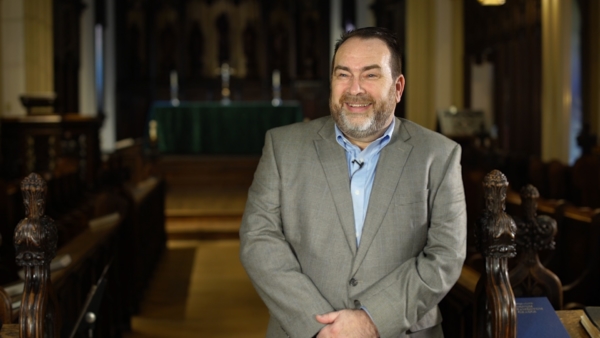 Asked to step in as Acting Dean in August 2017 and appointed as Interim Dean in January 2018, Anderson has led Nashotah House with transparency, collaboration, and a clear vision for its future. Since his appointment, the seminary is enjoying renewed vigor. Nashotah House reversed the trend of declining enrollment, which challenges all theological seminaries, and is attracting new students, including a growth of 50% in its residential student body from a year ago. Further marking the ascendancy of the seminary is a renewal of the seminary’s community life and the appointment of exceptional new faculty, including Dr. Hans Boersma, with the promise of other exciting additions in the near future.

Noting the seminary’s remarkable progress during Anderson’s tenure as Interim Dean, the Board of Directors appointed Dr. Anderson as Provost with a public investiture at the Alumni Day Mass on May 23, and then elected him as President at their July 19 meeting.

Dr. Anderson’s appointment follows a season of Board research and deliberation over the seminary’s future, including what structure would prove to be the most effective and efficient leading the seminary forward. Consulting with leaders in theological education, corporate governance, and comparable institutions, the Board determined to institute an innovative restructuring.

What had been the office of Dean/President will soon become the work of two executive leaders. With Dr. Anderson serving as Provost, or Chief Program Officer, the seminary will soon launch a search for his counterpart, a Chief Advancement Officer. While the Provost tends to the seminary’s academics, formation, worship, and community, the Chief Advancement Officer will nurture the seminary’s constituencies and advance the reputation of Nashotah House, providing resources to support the seminary’s growing programs. The search for this second leader will begin in earnest this fall.

Dr. Anderson is a familiar presence on the Nashotah House campus, having joined the faculty as a professor of New Testament and Greek in 2007 and serving as Academic Dean from 2009 to 2012. In the 2013-14 academic year, Anderson was granted a sabbatical, during which time he researched and wrote Paul’s New Perspective: Charting a Soteriological Journey (IVP Academic, 2016), after which he resumed his teaching responsibilities until the transitions of the past year. Nashotah House is in the final phases of hiring a new professor of New Testament and Greek to fill the vacancy created by Dr. Anderson’s appointment.
###
Founded in 1842 as an heir of the Oxford Movement and inspired by Jackson Kemper, the First Missionary Bishop of the Episcopal Church, Nashotah House exists to form persons for ministry in the breadth of the Catholic Tradition for the Episcopal Church, Churches in the Anglican Tradition, the wider Anglican Communion, and our Ecumenical Partners, thus continuing to serve our historic role as “The Mission”, empowering the Church for the spread of the Gospel of Jesus Christ.