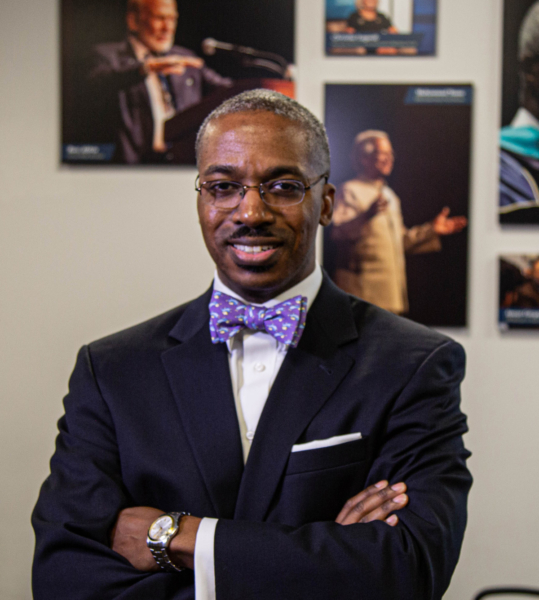 Reuben E. Brigety II, dean of the Elliott School of International Affairs at The George Washington University and former U.S. ambassador to the African Union, has been elected the University of the South’s 17th vice-chancellor and president.

The University’s Board of Trustees elected Brigety Feb. 28 following a national search that began in September 2019. He will begin his term as vice-chancellor on Aug. 1. Brigety succeeds John M. McCardell Jr., who will step down July 31, 2020, after serving 10 years as vice-chancellor.

“It is my honor and privilege to serve as the next vice-chancellor and president of the University of the South, an institution that holds a truly distinctive place in American higher education,” said Brigety. “During the search process, I got a glimpse of what makes Sewanee so special—an intellectual rigor coupled with an unparalleled sense of community, and a strong sense of place that is inclusive of everybody who finds their way here.”

“Reuben Brigety has spent his life in public service, as a naval officer, as a deputy assistant secretary of state, as an ambassador, and as an educator. Born as a child of the South, Reuben is now a man of the world,” said the Rt. Rev. Robert Skirving, bishop of the Episcopal Diocese of East Carolina, chancellor of the University, and chair of the Board of Trustees.

“His service to this nation has taken him to Iraq, Afghanistan, Haiti, the Middle East, and across Africa. Reuben will bring to Sewanee a rich global perspective and a strong record as a servant leader. I am very excited that Reuben has accepted this new call to service.”

As dean at GWU, Brigety has led a school of international affairs that is consistently ranked among the nation’s 10 best, and is one of the largest by enrollment. Under Brigety’s leadership, the Elliott School has created research institutes for every region of the world, launched an incubator for applied ethics education and leadership training, and increased support for student research travel and internships.

Prior to becoming dean in 2015, Brigety served as U.S. ambassador to the African Union for two years. In that role, he managed the strategic partnership between the United States and the African Union with an emphasis on democracy and governance, economic growth, and development. He also served as the permanent representative of the United States to the UN Economic Commission for Africa; and, earlier, as deputy assistant secretary of state in the Bureau of African Affairs, with responsibility for Southern African and regional security affairs.

“This is a great day. In Ambassador Brigety we have been fortunate to find a bold and thoughtful leader who will bring to Sewanee the gifts of insight and of compassion that propelled him to the global stage,” said Pulitzer Prize-winning author and historian Jon Meacham, C’91, a member of the search committee. “Reuben’s remarkable journey has taken him from the U.S. Naval Academy to Cambridge, from Africa to Washington. Along the way Reuben has mastered the arts of diplomacy, of service, and of critical thinking.”

“Ambassador Brigety is a transformational leader who is well-positioned to help us build a distinctive, inclusive vision of our university that will appeal to a new cohort of globally-minded students,” said Andrea N. Mansker, professor of history and chair of women’s and gender studies at Sewanee, and another search committee member. “Proposing to ‘bring Sewanee to the world and the world to Sewanee,’ he will help us raise our institution’s national and international profile as a model of excellence and advocacy in the liberal arts.”

Prior to his work in the policy arena, Brigety was an assistant professor of government and politics at George Mason University and before that taught international relations at the School of International Service at American University. Before entering academia, he conducted research missions in Afghanistan and Iraq with the Arms Division of Human Rights Watch.

A native of Jacksonville, Florida, Brigety is a 1995 distinguished midshipman graduate of the U.S. Naval Academy, and holds a master’s degree in philosophy and a Ph.D. in international relations from the University of Cambridge. Brigety is a member of the American Academy of Diplomacy, a life member of the Council on Foreign Relations, and a recipient of the council’s International Affairs Fellowship.

Brigety and his wife, Leelie Selassie, M.D., have two sons.

About the University of the South
The University of the South, known familiarly as Sewanee, comprises a nationally recognized College of Arts and Sciences, a distinguished School of Theology, and a School of Letters. Located on Tennessee’s Cumberland Plateau with 13,000 forested acres used both as outdoor laboratory space and for recreation, Sewanee enrolls 1,700 undergraduates and approximately 160 seminarians. Sewanee offers 37 majors and 43 minors, and pre-professional programs in business, medicine, education, engineering, and law. The university has graduated 26 Rhodes Scholars (a record unmatched by all but a handful of institutions), dozens of Fulbright Scholars, and 34 NCAA Postgraduate Scholars. Over its history, Sewanee has become a meeting place for some of America’s most respected literary figures. It is home to the Sewanee Writers Conference and the Sewanee Review (the nation’s longest continuously published literary quarterly), and holds the copyrights to Tennessee Williams’ body of work, which was left to the school by the playwright. Visit www.sewanee.edu.