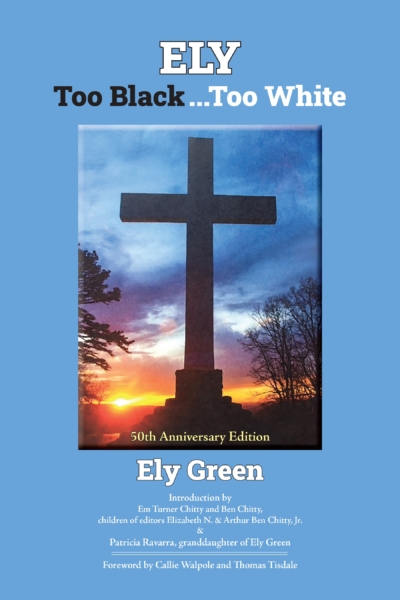 Home House Press of Charleston, South Carolina, in collaboration with the Episcopal Diocese of South Carolina, is pleased to announce the publication of the 50th anniversary edition of the acclaimed autobiography ELY: Too Black…Too White by Ely Green.

Born in the early twentieth century, Ely Green was the son of a white man whose family was believed to be rooted in Charleston, South Carolina and a Black domestic worker in the small community of Sewanee, Tennessee where The University of the South was founded in 1857. He portrays a tortured, courageous life beginning with his childhood in Sewanee and continuing across America in Texas and California, always fighting for the human dignity he deserved but was often denied because of the color of his skin.  Of the first edition the novelist Walker Percy remarked, “The love in it, and the terrible reproach, is enough to wring the heart.”

Now, with the support and collaboration of Ely’s granddaughter Patricia Ravarra, and with the thankful assistance of the family of Arthur Ben and Elizabeth N. Chitty, to whom Ely Green presented his autobiography in the mid-1960’s, in the hopes of making it available to the rest of the world, we are pleased to issue this new publication.

Of the publication, Chancellor Thomas Tisdale and Archdeacon Callie Walpole write: “We are honored to present this 50th anniversary of this great work that from its pages is still crying for racial equality throughout our land.”

The book is now available on Amazon or HomeHousePress.com. A hardback and electronic version will be available the week of February 14. Photos of the book cover can be downloaded at this link.

About The Diocese of South Carolina