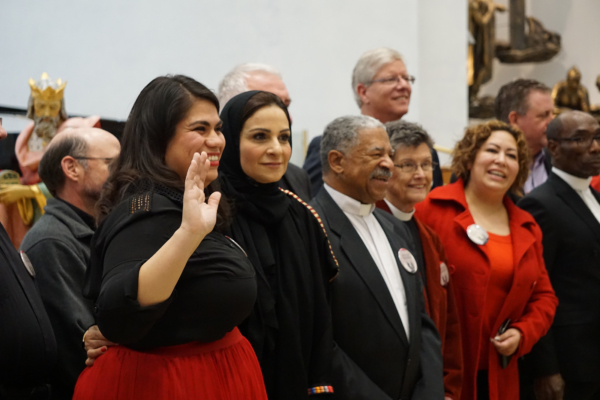 DREAMer Astrid Silva (waving) with the interfaith leaders at the Shrine of the Most Holy Redeemer near the Las Vegas Strip.

“Love Thy Neighbor” was the theme of interfaith vigils in support of refugees, migrants and pilgrims on Jan. 6 in Las Vegas and Reno led by the Rev. Canon Catherine Gregg, chief of staff of the Episcopal Diocese of Nevada.

“At the core of every major faith tradition is the command to love our neighbor,” Gregg said. “Loving our neighbor isn’t just an idea nor an option but an essential part of our belief and practice.”

Organized in response to the treatment of refugees and migrants at our borders and within our country, the vigils were a public witness in prayerful support of our neighbors.

“I’m here today breaking the law,” said Silva, who crossed the Rio Grande with her mother at the age of 4 and is now the national face of the DREAMers. She spoke at the Democratic National Convention and also gave the Democratic response to President Trump’s State of the Union in 2018.

Geoconda Arguello-Kline, a Nicaraguan refugee who rose from casino guest room attendant to lead the 60,000-member Culinary Union in Las Vegas, said “Immigrant families live in fear every day. Wrong is wrong.  We have to learn to love each other.”

“Love needs to be made visible, and so we come together to pray, to sing, to share our stories on behalf of our neighbors – our neighbors sitting next to us, our neighbors at the border who seek refuge and asylum, and our young neighbors in detention who remain separated from their parents,” said Gregg to the estimated 1,000 participants at the Shrine of the Most Holy Redeemer just off the Las Vegas Strip.