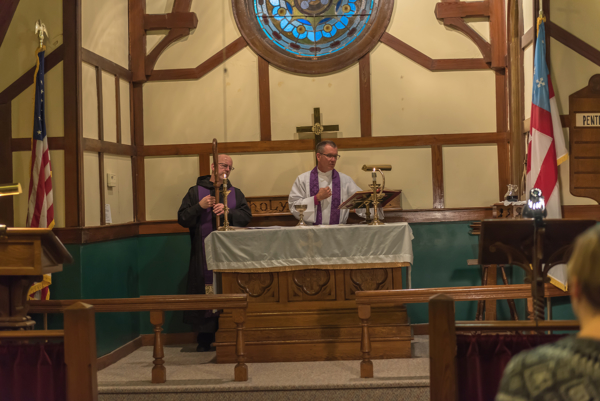 At the invitation of the Diocese of Nebraska’s Bishop, J. Scott Barker, Grace Episcopal Church in Tecumseh, Nebraska and Balancing the Scales of Justice Task Force hosted a Prayer Vigil and Eucharist for the reform of the criminal justice system and the abolition of capital punishment. Called In the Light of Justice, the event fell on the day set aside as the World Day Against the Death Penalty.

The Scales of Justice Task Force was created in response to a Resolution of the General Convention that “…[bishops] appoint task forces of clergy and lay persons…to develop a plan to repeal the Death Penalty, to be witnesses in the name of Jesus Christ, and to…report on [these] actions to the Presiding Bishop of the Episcopal Church.” Kaitlin Reece, Chair of the Task Force, said: “The Task Force seeks an end to capital punishment and reforms to the criminal justice system that recognize structural and institutional racism that plague many American institutions, including the courts and law enforcement.”

Grace Episcopal Church is located in Tecumseh, Nebraska. Tecumseh, a small rural community of 1,631 Nebraskans, is several hours from the state’s two largest population centers. It is also the site of the Tecumseh State Correctional Institute, which houses Nebraska’s 12 inmates on death row and other maximum-security prisoners. The prison grounds include a 194-bed solitary confinement unit.

The Prayer Vigil occurred over a six-hour period and was organized and led by the community of The Benedictine Way and young adults from the Benedictine Service Corps. Bishop Scott Barker presided at the Eucharist that immediately followed.

The event comes at a time when Nebraska’s criminal justice system is in crisis. The state has the second-most overcrowded prison system in the country, according to a March Lincoln Journal-Star report. The Nebraska Department of Corrections has continued its practice of double-bunking individuals in solitary confinement, where two individuals in restrictive housing reside together in one cell, largely because of prison overcrowding
Brother James Dowd, Prior of The Benedictine Way said “our community is dedicated to a life of prayer, service, and community with an emphasis on working with and for those who are among the poor and forgotten. It seems to us that those in prison are among the most forgotten in our society and so we were more than happy to work with Balancing the Scales of Justice when Bishop Barker asked.

Bishop Barker stated that “the time has come, indeed it is overdue, for prison reform to be taken seriously by the state government of Nebraska and by all Nebraskans.” He went on “both the prisoners and those who work in the prison system are children of God and must be afforded the dignity which our faith teaches us that they deserve.”