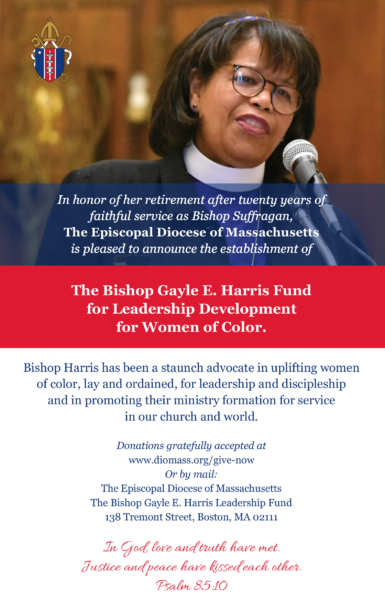 Donations to the Bishop Gayle E. Harris Fund for Leadership Development for Women of Color are being gratefully accepted online at www.diomass.org/give-now.

In honor of Bishop Gayle E. Harris’s 20 years of service as bishop suffragan, a new fund has been established to support leadership development for women of color in the Episcopal Diocese of Massachusetts.

Harris, who has served as bishop suffragan in the Diocese of Massachusetts since January 2003, announced in Septemberthat she will complete her work in the diocese as of Dec. 31 of this year and then take sabbatical time ahead of her official retirement date of March 31, 2023.

Gates announced to the convention that the new fund in Harris’s honor will “provide financial support for women of color in the Diocese of Massachusetts to participate in trainings, workshops or other formation programs fostering the development of leadership skills. It will be available to those furthering their gifts as lay leaders as well as persons preparing for ordained leadership.”

Diocesan Convention paused during its afternoon business session on Oct. 29 to recognize and thank Harris. The program included a video message from Presiding Bishop Michael B. Curry and tributes from outgoing Standing Committee members William C. Boyce of Grace Church in New Bedford and the Rev. Deborah Phillips of Grace Church in Salem, as well as a video montage of photos capturing highlights from Harris’s 20 years of episcopal ministry.

“Your election was historic in its own right,” Boyce said. “It marked you as the 11th woman bishop to be elected in the episcopal succession and was the first time a woman followed a woman in office in this church,” he said, referring to the late Bishop Barbara C. Harris who preceded Gayle Harris as bishop suffragan in the Diocese of Massachusetts.

“For so many, whenever there was need, [Gayle Harris] has always responded with prophetic witness and pastoral care,” Curry said. “She’s been a pathfinder,” he said, and as “a bishop of color, a woman, she’s paved a way for others to follow in her footsteps as she follows in the footsteps of Jesus. And, I guess, what else could you expect from a bishop named Bishop Harris?”