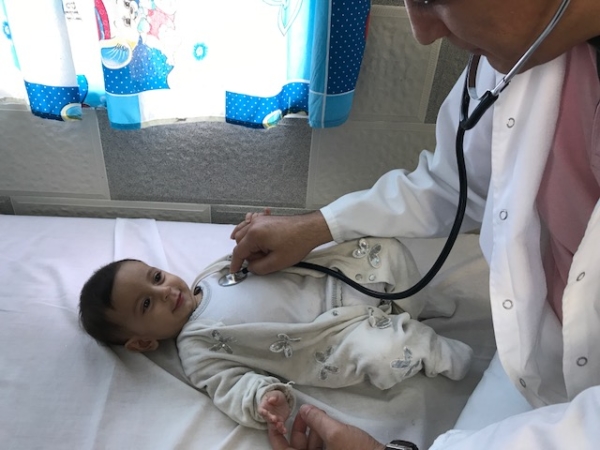 Since the announcement in September that the U.S. Government planned to cut $200 million in aid to UNRWA, the United Nations’ agency dedicated to providing humanitarian aid to Palestinian refugees, and the news the following week of $25 million in cuts in direct aid to support hospitals affiliated with the East Jerusalem Hospital Network, we have been tracking the implications of those cuts on the institutions of the Episcopal Diocese of Jerusalem, particularly Al Ahli Hospital in Gaza City and the Princess Basma Center for Disabled Children in East Jerusalem.

While in recent weeks many European Union countries, as well as Japan, China, and Qatar, among others, have stepped up by pledging to address the shortfall, the impacts of the cuts could have devastating impacts on all sectors of society. Many thousands of vulnerable Palestinians, including women and children – particularly those in Gaza – are already experiencing the effects of these sweeping cuts.

Ahli Arab Hospital, Gaza
By early October Ahli Arab Hospital (AAH) in Gaza felt the effects on two fronts: In addition to seeing monthly support from UNRWA drop from the contracted figure of $54,000 to a maximum of $14,000, a three-year, $900,000 joint project between AAH and USAID-funded agencies that subsidizes medical care to refugees was defunded. The elimination of two major funding sources at once has forced the reduction of direct services to patients and triggered staff lay-offs. The trickle-down effect of layoffs will seep into all levels of Gazan society and economic life.

Princess Basma Center, East Jerusalem
The Princess Basma Center, one of the few institutions to provide rehabilitation and medical treatment to children with disabilities and their families in East Jerusalem, the West Bank and Gaza, was already on tenuous financial footing because of overdue payments from the Ministry of Health. The $25 million in cuts in aid to the East Jerusalem Hospital Network will compound its shortfalls and further impede the Center’s ability to provide critical services to children and their families. Particularly vulnerable is the service that provides newly-identified children and their mothers with an intensive two-week residential therapy program. As many as 500 children are in jeopardy of losing services if the funding shortfall is not addressed.

Archbishop Suheil Dawani recently spoke frankly about his grave concerns, “If we don’t act immediately and shift gears to find other means of support and subsidy to our affected diocesan Institutions, I can’t perceive how we can sustain and support them with the limited resources we have. I am very much concerned and afraid that cutting off all American assistance, mostly in humanitarian aid, has hobbled the aid agencies that receive the funds, and more consequently, crippled the lives of Palestinians who continue to live in dire need and have fewer employment prospects now more than ever. This is unfair and beneath our compassion.”

Your gifts provide critical support to the humanitarian organizations that serve Palestinians in need of medical care, rehabilitative services, and education. All of you who have visited the Diocese of Jerusalem provide people hope with your presence. Thank you for all you do. Please consider helping again with a recurring gift of any size. Your support is needed now more than ever. Donate at www.afedj.org or https://secure.qgiv.com/for/?key=friendsedj