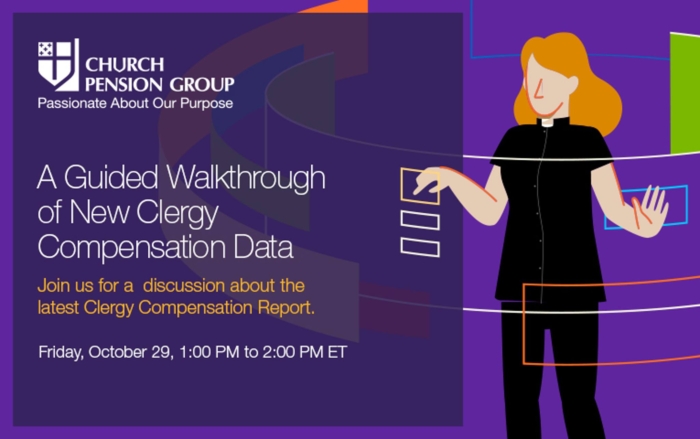 The Church Pension Group (CPG), a financial services organization that serves The Episcopal Church, today released the 2020 Episcopal Clergy Compensation Report (cpg.org/research). The interactive report offers an in-depth look at demographic and geographic differences in clergy compensation across The Episcopal Church. Members of CPG’s Research & Data team will offer a guided walkthrough of the data and answer questions in a webinar presentation today, Friday, October 29, from 1:00PM to 2:00PM ET. Interested individuals can register at cpg.org/research.

For the first time, this yearly report includes data on race, ethnicity, gender identity, and sexual orientation collected from 42% of clergy on a voluntary basis. CPG, in its role as the Recorder of Ordinations, continues to collect this data (cpg.org/picture) in its support of the Church’s Becoming Beloved Community initiative and resolutions passed by the 79th General Convention in 2018.

“Today’s Episcopal Church is very different from the Church of even a few years ago, and it continues to evolve in exciting ways,” said Matthew Price, PhD, Senior Vice President of Research & Data at CPG. “This annual report is designed to offer a snapshot of the evolving Church and provide greater clarity around parity and equity in compensation among clergy. I encourage anyone who has an interest in learning more about the data in the report to join us for our webinar.”

The report, which breaks down data at a diocesan level and provides compensation figures for all international clergy, also offers a map-based graphic interface to allow individuals a faster and easier way to access this important information. To preserve the anonymity of the individuals behind the data in the report, CPG provides the median compensation of a demographic group only if it contains at least five clerics. This means that data may not be available for some geographic, personal characteristic, and employment categories.

In an ongoing effort to provide a fuller understanding of the demographic diversity of clergy in the Church in future reports, all clergy are encouraged to update their profile in the MyCPG Accounts portal. Individuals can learn more at cpg.org/picture.