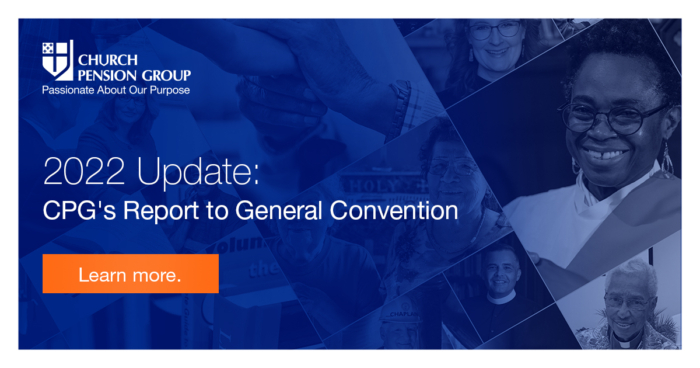 The report features video reflections from CPG senior leaders; The Church Pension Fund Board of Trustees (CPF Board), including Canon Kathryn McCormick, Chair-Elect of the CPF Board; and clients, such as Bishop Kimberly Lucas from The Episcopal Church in Colorado, Peter Pereira, former Treasurer and Chief Financial Officer of The Episcopal Church in Hawai`i, and Roberta “Tutu” DuTeil, the 100-year-old widow of the Rev. Claude DuTeil.

The report also includes a link to CPG’s response to Resoluti­on 2018-A237, which offers a review of the current state of parity between the pensions of lay and ordained Church employees, domestic and nondomestic Church employees, and Church employees of disparate incomes. The resolution has a particular focus on how income disparities in the Church, which directly affect pension benefits, are manifested across gender and racial or ethnic lines.

“We are pleased to release our Report to General Convention, which highlights our work in support of the clergy, lay employees, and institutions of the Church, and includes our responses to several resolutions passed at the 79th General Convention,” said Mary Kate Wold, CEO and President of CPG. “I encourage people preparing to attend General Convention to read it, and I also recommend it to others who would like to learn more about CPG’s efforts to meet the needs of the evolving Church.”

CPG has hosted several webinars to share highlights of its work, to collect feedback, and to exchange insights on areas of importance to the Church. Past webinars with senior CPG leaders, which have included conversations on pension parity, racial reconciliation, and socially responsible investing, are posted on CPG’s YouTube channel.