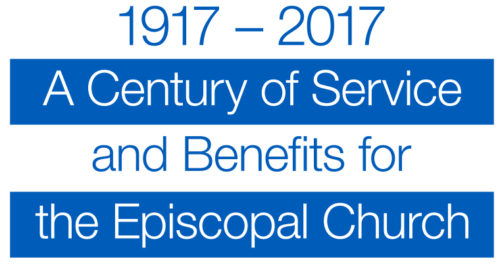 “A hundred years ago Bishop William Lawrence had an audacious vision of creating a pension fund that would enable clergy who spent their lives in service to the Episcopal Church to retire in dignity,” said Mary Kate Wold, CEO and president of CPG. “Today we still adhere to his vision and have paid out more than $5.5 billion in benefits over the past century. What began as a pension benefit for retiring clergy has expanded to include a full range of benefits and other products for clergy and lay employees of the Church.”

“As we look to our next century of service, we are committed to maintaining our financial strength, upholding our fiduciary responsibilities, and living out our purpose,” Wold added. “We will continue to seek to understand the challenges and lives of those whom we serve so we can be ready to respond to evolving needs in the years ahead.”

As part of this historic occasion, New York City Mayor Bill de Blasio, Memphis, Tennessee Mayor Jim Strickland, and the Select Board of the Town of Bennington, Vermont, where CPG has offices, declared March 1, “The Church Pension Group Centennial Anniversary Day.” In addition, a tree will be planted in the Bishop’s Garden at the Cathedral Church of St. John the Divine, where legislation to create the Church Pension Fund was passed by an act of General Convention in 1913.

CPG employees will also participate in a Day of Service to support the Kids In Need Foundation, an organization that provides free school supplies nationally to students most in need. Presiding Bishop Michael B. Curry will preside over a celebration of the Holy Eucharist at the Church of the Incarnation later in 2017.

Wold concluded, “We are blessed to have learned from and to stand on the shoulders of those who came before us. We are imbued with the same commitment and values shared by Bishop Lawrence a century ago and remain ever passionate about our purpose, which is serving the employee benefits needs of the Episcopal Church.”

About The Church Pension Fund