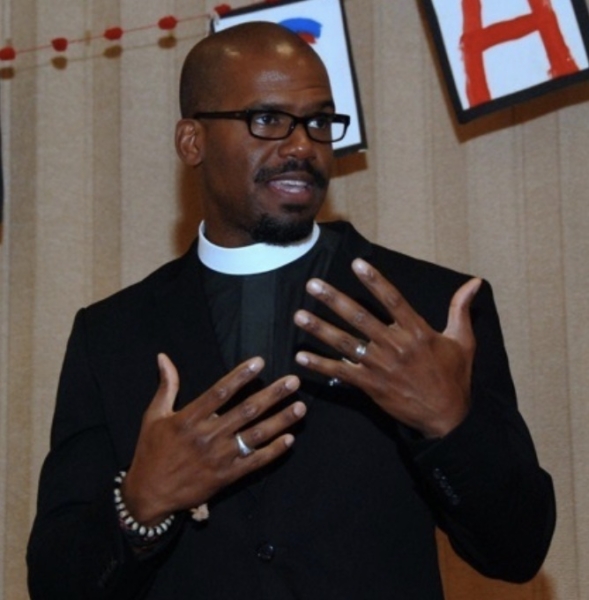 The Rev. Thompson grew up in The Episcopal Church and was ordained to the priesthood at Christ Church Cathedral in 2003. He has spent the last eighteen years in parish ministry in the Dioceses of Long Island and New York. He currently serves as Rector of Nyack’s Grace Episcopal Church, the parish he has led since 2013.

Thompson received his Master’s of Divinity degree from The General Theological Seminary (New York, NY), holds a Masters in Educational Communication and Technology from New York University’s School of Education, and a Bachelor of Arts in English from Hobart College.

The son of the late Russelle Cross Thompson and the late Rt. Rev. Herbert Thompson Jr., who retired as Bishop of Southern Ohio before his death, Thompson has adopted his father’s motto for ministry as his own: “To reconcile. To heal. To Liberate. To Serve.”

In addition to his life and work in the Church, Thompson is also community activist who is dedicated to works and causes that focus on reconciliation, peace, justice, equality, equity, food insecurity, homelessness, undoing racism, and the environment.

“I have long held the belief that God is doing something new in our lives, and in the world, when we open ourselves to the movement of the Holy Spirit,” says the new Dean. “During such times, endless opportunities and blessings abound.

“I am truly thankful that God has led me, and that the faithful members of Christ Church Cathedral have called me, to be their Dean. I am thrilled, honored, and humbled. And I look forward to taking up this mantle to journey with the cathedral family as together we make the love of Christ known in Cincinnati in all that we are and all that we do. God is good. All the time, God is good!”

Owen Thompson is married to Jonna Morales-Thompson, a holistic nutritionist and his wife of 21 years. Together they have two sons, Ridley and Carter, and two rescue dogs, Gabby and Leia.

About Christ Church Cathedral
Throughout its 200-year history, the congregation of Christ Church Cathedral has dedicated itself to act in service to others. This has taken many forms within the Greater Cincinnati area, and this service has been possible thanks to the cathedral’s many longstanding partners within the community. The congregation is committed to the ongoing work of social justice for all people, as demonstrated by its ministries of reconciliation regardless of race, creed, class, gender, or sexual orientation.