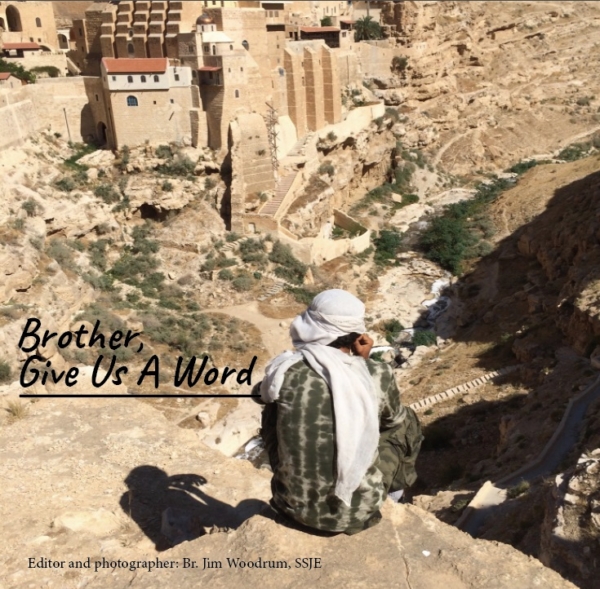 The Brothers of the Society of Saint John the Evangelist celebrate the 10th Anniversary of their daily meditation offering with a new book of photographs and meditations.

A small Episcopal monastery along the Charles River made the leap into the digital age 10 years ago, delivering a daily meditation titled “Brother, Give Us A Word” to subscribers via email. The Brothers of The Society of Saint John the Evangelist (SSJE) celebrate this anniversary with a new book of photographs, taken by Br. Jim Woodrum SSJE, paired with meditations from the entire community of Brothers.

It may be surprising that a monastery would be on the leading edge of technology. As churches scrambled to adjust to a digital experience in the Covid-era, the Brothers of SSJE found themselves building on an established foundation, rather than starting from scratch.

“Our community’s founders, Fathers Benson, Grafton, and O’Neil did not simply start a religious community in 1866, they began a communications enterprise”, observes Br. James Koester SSJE, the current Superior of SSJE.

“We believe monks have an important role in the life of the church and the world. The gentle moves we have made to shift some of our approaches to ministry has allowed us to engage and nurture so many people, particularly now during a time of physical isolation.”

“Brother, Give Us A Word” draws from an ancient practice dating to the 4th century. As the earliest monastics withdrew into the desert, they began to attract others who sought to deepen their spiritual lives. A person would seek out the desert monastics and then ask them to share some wisdom: “Abba, say a word…”, “Amma, speak a word…”. The “word” from the wise did not necessarily answer that person’s question, but instead it offered an instigation to lead them further into their own discovery.

The idea for the book emerged as Br. Jim’s interest in photography grew over his 9 years as a monk. “These photographs are physical expressions of my own prayer. One of my biggest surprises since coming to SSJE has been discovering that photography is a way that I can practice the presence of God. I never thought of myself as a visual artist, but photography has become a way for me to enter into and interpret the dialogue I’m having with Jesus, who is present in that moment when something catches my eye in a fresh way, and I take a photo.”

The book includes 35 meditations speaking to each church season, with all Brothers in the community contributing meditations. Br. Jim took the photographs for the book in a variety of locations during pilgrimages across the United Kingdom, the Holy Land, and the neighborhoods of Cambridge and Boston, as well as SSJE’s monastery chapel.

Likewise, subscribers span the globe. With a total of 20,000 people in the U.S., The Philippines, Australia, South Africa, Canada and the U.K.  to name a few, praying together through the meditation.

“Taking photographs has been a wonderful surprise for me, because I had no idea that God was talking to me in this way”, said Br. Jim. “When I take a picture and edit it, I can feel God’s invitation to be a co-creator with God.”

People seem to recognize the broad scope of the offering, including the invitation to creativity within and around us. As one noted, “ ‘Brother, Give Us A Word’ can show you how to live. All activities become creative when they don’t just depend on you. For me, more than any beliefs, it has become a compass.”

An Episcopal priest in Virginia added, “ ‘Brother, Give Us A Word’ is food for my soul. Each morning, I look forward to savoring that day’s reflection, whether vegetable or chocolate, because I know that the main ingredient is always an overflowing cup of God’s lavish love. Nourished from the riches of that extravagant love, I am strengthened for the day’s journey.”

About The Society of Saint John the Evangelist:

We are a community of men giving our whole selves over to living the Gospel of Jesus Christ. Rooted in the ancient monastic traditions of prayer and community life, and critically engaged with contemporary culture, we seek to know and share an authentic experience of God’s love and mercy. We live a common life shaped by worship, prayer, and our Rule of Life