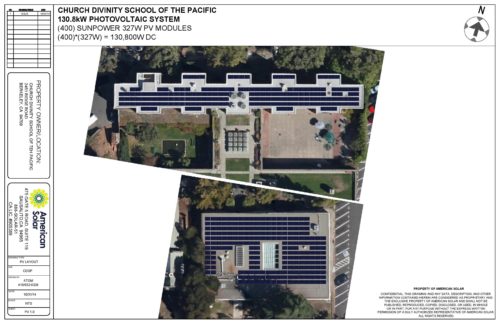 [Church Divinity School of the Pacific] CDSP’s plans for the largest solar installation of any seminary in the United States took a big step forward in January when the institution received an anonymous gift of $250,000 over five years toward the project’s $560,000 cost.

“At CDSP, we believe that moral accountability in our relationship to the environment is an essential component of quality theological education,” said the Very Rev. W. Mark Richardson, dean and president. “We strive to be good stewards of the resources we have been given, and with this generous lead gift for solar energy, we will be able to reduce CDSP’s carbon footprint and model sustainable living as a Christian community.”

CDSP committed to reducing its global warming pollution by 50% by 2030 when it signed the Paris Pledge developed by Interfaith Power and Light, an anti-global warming advocacy network. The pledge was launched at the United Nations-sponsored Paris Climate Change Conference in December 2015, which Richardson attended as a representative of the Episcopal Church.

The planned installation of more than 400 solar panels on three buildings is a key part of the seminary’s plan to fulfill the Paris Pledge. The panels will be installed first of the roofs of Easton and Parsons Halls and later on the roof of Shires Hall.

“We are blessed with an active, supportive community of donors and alumni who share our vision of environmental sustainability as an integral part of theological education,” said Laurel Johnson, director of alumni affairs and major gifts officer at CDSP. “This generous lead gift makes that commitment tangible and provides alumni and friends with the opportunity to join this important movement to make CDSP more sustainable for generations to come.”

In January, CDSP’s solar panel plan was given a boost by the California Public Utilities Commission which voted to allow solar panel owners to sell the excess power they generate back to their utility at full retail rate. The practice, known as net metering, is seen by solar advocates as essential to making solar installations affordable because it allows solar users to get credit for the excess energy they generate in the daytime and draw on that credit during peak usage times when solar energy is not being generated.

The solar installation project is now being reviewed by the City of Berkeley, and CDSP hopes to begin work this spring.