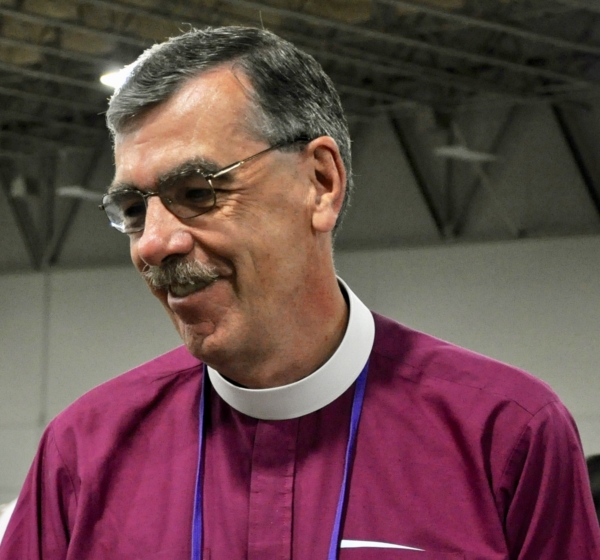 As Tom Ely concludes his tenure as the 10th Bishop of Vermont, Claiming the Blessing gives thanks for his work, witness and leadership.

During the 18 years of his episcopate, Bishop Ely has been a valiant champion of the Gospel values of love, justice and compassion in general and of LGBTQ inclusion in specific. He has stood with us – in good times and in bad – as we have worked together to live into the dream of a church where there will be no outcasts and where all who come seeking God’s love are fully included in the Beloved Community.

Tom Ely was a stalwart champion of civil unions and then marriage equality in the civic arena in Vermont. In 2003 he stood with Bishop Gene Robinson during his election and consent process, was a supporter of our Inclusive Communion witness at the 2008 Lambeth Conference and was a leader in the Chicago Consultation … supporting the full inclusion of LGBTQ Christians in the Episcopal Church and the worldwide Anglican Communion. He served as a member of the Blessings Project Task Force from 2009-2012, the Marriage Task Force from 2012-2018 and is currently serving as a member of the Communion Across Difference Task Force.

“When the story of the movement for the full inclusion of LGBTQ people in the Episcopal Church is written, Bishop Tom Ely will inarguably be one of its heroes,” said Susan Russell, convener of the Claiming the Blessing Steering Committee. “It is impossible to overstate the impact of the gifts he brought to this struggle as a keen strategic thinker, a doggedly committed ally and a deeply compassionate pastor.”

With gratitude for his vision, compassion and persistence Claiming the Blessing recognizes his years of prophetic ministry with the inaugural “Voice of Witness” Award — given in recognition of decades of tireless work proclaiming the Good News of God’s inclusive love.

A guiding text for the work of Claiming the Blessing since its establishment in 2002 has been Genesis 12:2 … “I will bless you so that you will be a blessing.” Bishop Tom Ely has been a blessing not only to LGBTQ Episcopalians but to the whole church. We are closer to being a church where the full inclusion of all the baptized in all the sacraments is not just a goal to which we aspire but a reality we live because of his ministry — and Claiming the Blessing is honored to celebrate Bishop Ely and his legacy today with this award.