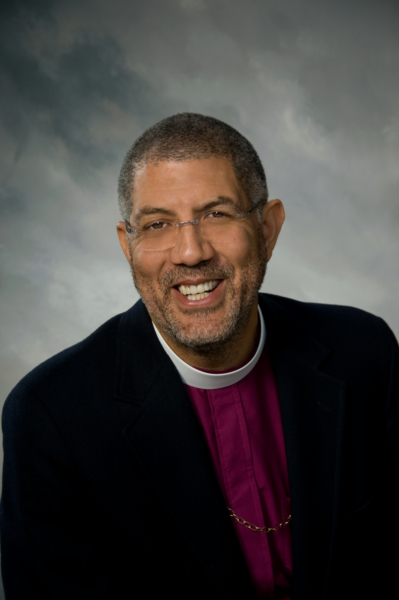 The Rt. Rev. Robert C. Wright, Bishop of the Episcopal Diocese of Atlanta will serve as the next Chair of the Board of Trustees of The General Theological Seminary and the first African American appointed to the position.

“We are overjoyed to have Bishop Wright as the next Chair of the Board at General. His leadership in The Episcopal Church, fueled by love and commitment to Jesus and the Gospel, and particularly his progressive views of leadership as discipleship make him an ideal choice to lead us forward,” said the Very Rev. Kurt H. Dunkle ’04, Dean and President. On the historic nature of this appointment, Dunkle cited the significance of developing an “exciting inclusion of folks from all backgrounds, particularly from those historically marginalized by the institutional church.” Additionally, Dunkle offered his enthusiasm for the Rev. Ellen Tillotson ’83, and her continued strength in leadership at the seminary, now serving as First Vice Chair of the Board of Trustees, and the Rt. Rev. Kevin Brown ’07 for his new role as Second Vice Chair. Dunkle also offers his “immense gratitude” for the leadership of the retiring Chair, the Rt. Rev. Clifton “Dan” Daniels and his steady, prayerful presence, saying “He has been a tireless advocate with a big heart, and will always be a great friend to the seminary and to Cathleen and myself.”

Wright’s first meeting, serving as its chair, convenes today. Wright became the tenth bishop of Atlanta in 2012, the first African American to become an Episcopal bishop in Georgia. Prior to his episcopacy, Wright served as the rector of St. Paul’s Episcopal Church in Atlanta for 10 years. Since becoming bishop, Wright addressed the Georgia state legislature about gun control, advocated for Medicaid expansion and has been a vocal and active opponent of the death penalty in Georgia. Wright delivered the 2016 Paddock Lectures at General Seminary on “The Leadership of Jesus.”

Wright was born in a Roman Catholic orphanage in Pittsburgh, Pennsylvania, and at the age of nine months was adopted by Earl C. and Charlene Wright. After graduating high school, he served five years as a U. S. Navy helicopter crew chief and search and rescue diver before entering Howard University in Washington, D.C. Upon graduating from Howard in 1991 with a degree in history and political science, he worked as a child advocate for two mayors and for the Children’s Defense Fund. He later earned a certificate in biblical studies at Ridley Hall, Cambridge University in England, and a master of divinity from VTS. He is married to Beth Sarah-Wright, Ph.D., an inspirational speaker and author, and mother to their five children: Jordan, Emmanuel, Selah, Noah and Moses-Daniel.
——————————–

About General Seminary
General Seminary’s mission statement was adopted in 1999 and reaffirmed in 2015: Educating and forming lay and ordained leaders for the church in a changing world. As we live out this mission, we seek to be and to become a community for whom ongoing and deepening conversion to new life in Christ is a constant goal. Our purpose is to invite and call others to that life of conversion by our own understanding of the Christian faith — biblical, historical and theological — and our ability to reflect on that faith. Located in historic Chelsea Square, our students have the diversity and opportunity of experiences that New York City has to offer. Visit us online at www.gts.edu.