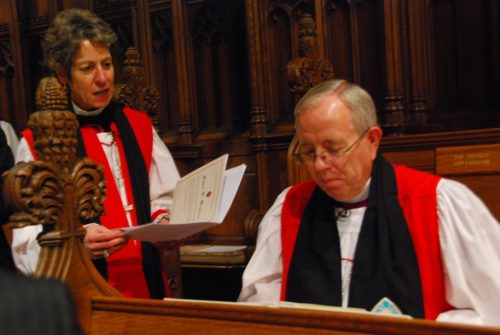 On Jan. 10, the Rt. Rev. James Magness, bishop suffragan for federal ministries, was installed as a canon at Washington National Cathedral. What follows is Presiding Bishop Katharine Jefferts Schori’s sermon.

There is a standing joke about the different kinds of canons, but it only helps a little that they’re spelled differently.  The one we’re installing tonight is a person attached to a cathedral.  Originally canons were cathedral clergy who lived by a shared rule, but today a canon is someone who is honored by being given an assigned place to sit, a stall or seat in the cathedral.  We will seat Jay tonight.  It means he has a right to be there at any time, and indeed a responsibility to share in the ministry of the cathedral.  The other kind of cannon is used to fire on the enemy.  The first sort of canon is sometimes fired off and sent in as the “big gun” to do some hard task of intervention, discipline, or even peace-making.  Bishop Magness’ role has some of that dual character.

This bishop canon is sent out of here on his daily rounds to heal and do the kind of work Micah speaks of – to turn swords into plowshares, and to reshape wounded vessels of war into healed and whole human beings.  The Magness canon won’t stay fixed in position here.  He will certainly return here, and I hope frequently, but his work is like that of the second sort of cannon.  He isn’t fired out there like a projectile, but he is sent urgently, to chaplains around the world.  His work is to equip, support, and challenge the chaplains who minister to members of the armed services, and those who live and work in federal hospitals and prisons.  His ministry extends around the globe as a reconciler, healer, and bridge-builder for those who serve in a variety of ministries of healing – to soldiers, sailors, airmen, and marines, to patients and inmates, to medical and prison staff.  He, and those he sends in turn, go to battlefields, death row, surgery suites, aircraft carriers, and all who go down to the sea in ships to ply their trade in deep waters.  He goes as a witness to the healing power of God, and to the affirmation that God is with us, wherever we are, even and especially in the valley of the shadow of death.

Cathedrals are often understood as houses of prayer for all people, places where people of many faiths may find a welcome, and begin to engage one another.  This cathedral claims its part in God’s healing mission even more explicitly:  to be a catalyst of spiritual harmony in this nation, reconcile people of different faiths, and build compassion in the world.  That vision grows out of the ancient biblical dream of a healed world, a part of which we heard in Micah – that the house of God, like this one, built on the highest hill in the city, will be a source of teaching, enlightenment, peace-making, and justice for the world.  This cathedral shares that identity, and sends Bishop Magness as an emissary in that work.  He is meant to be an icon of building that world of peace and justice.

In small ways and larger ones, Bishop Magness’ office is giving witness to that vision.  His XO (Executive Officer), Wally Jensen, is a Lutheran pastor, and while The Episcopal Church and the ELCA have been in full communion for 11 years, we haven’t yet done a great deal of work together beyond calling clergy from the other denomination to some of our local congregations.  Jay has worked to extend our relationships beyond the local – Lutheran and Episcopal chaplains are being trained together, last week they held a joint ethics conference, and the coordinating work is moving to deeper levels of understanding and learning.  His office has set out clear guidelines and measures – the kind of teaching ministry that’s supposed to flow from this mountain, proclaiming the reign of God.  Most of us need mileage markers and street signs and maps to stay on a journey, and Jay and his team are expanding the maps beyond what’s been available in the past.  They are offering a guidance system for that urgent message of healing.

There’s another important aspect to the ministry of this kind of canon/cannon.  It’s not just a dual role, but perhaps multi-chambered – not a double-barreled firearm, but an instrument of sending that has a heart, a heart of flesh as Ezekiel says, one that’s able to keep the stuff of life circulating in a world that is desperate for transfusions of hope.  Jay’s office is an icon of compassion as well as teaching and guiding.  This ministry renews human beings in environments that often dehumanize and violate human dignity.  The labors of this office bring the presence of God who “will wipe away every tear” and offer hope for a world where “death will be no more.  Mourning, and crying, and pain will be no more,” where God proclaims, “see, I am making all things new.”  That labor needs all the chambers and instruments of sending we can muster.

Jay, be a canon/cannon of peace, and healing, and compassion. Remind us and send us all to do the same.